Beef E.coli: From Farm to Table?

What do we know about E coli and its relationship to beef? By all accounts, not enough to stop beef ecoli recalls. Yet another outbreak of the E coli O157:H7 strain has shown up, this time in Canada. 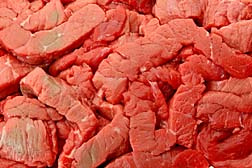 On July 7, 2007 the CBC news reported that officials warned people not to eat certain fresh and frozen ground beef products sold at Canada Safeway and independent supermarkets because the meat may be contaminated with potentially deadly E. coli bacteria. Calgary-based Canada Safeway is voluntarily recalling the affected products from the marketplace. The Canadian Food Inspection Agency reported five cases of illness from the products.

What is E. coli and where does it come from?
All cattle have a harmless strain of E. coli bacteria that is needed to digest food and a small percentage of cattle (usually from 2-3 percent but sometimes as high as 10 percent) also carry the E.coli 0157:H7 strain.

E. coli O157:H7 is one of hundreds of strains of the bacterium Escherichia coli. The numbers and letters 0157:H7 refer to those markers on the bacterium's surface and distinguish the harmful bacteria from other, and some harmless, types of E. coli.

In 1982 an investigation into an outbreak of colitis determined that E. coli was found to be a foodborne pathogen associated with hamburgers eaten from a fast food chain restaurant.

Since that time, scientists now believe that E. coli is spread via manure from one cow to another when they enter the slaughterhouse. From there, this potentially deadly bacteria can find its way into our food chain mainly from undercooked ground beef.

But the manure isn't restricted to contaminated meat: it can appear in organic fertilizer by way of irrigation ponds and rainstorm runoff. This may explain how E.coli turns up in spinach, for example. Seventy-one people got sick in California, Washington and Colorado after drinking contaminated apple juice.
Or the time when 47 people fell ill in Connecticut and Illinois after eating tainted lettuce. Or in Minnesota, eight people swam in contaminated lake water and became ill. Although these illnesses were caused by. E. coli O157:H7, they were not caused by eating ground beef.

Beef producers breathed a sigh of relief, saying these cases of E.coli had nothing to do with cattle and it was unfair to link beef to this pathogen. But it was a short-lived sigh because scientists now believe that most non-beef E. coli illnesses is traced to E. coli-laced cow manure, which in turn can contaminate compost fertilizer and water in irrigation ponds.

More News
Research is still being carried out to find out exactly how mutant E. coli starts and spreads. It has also turned up in other animals such as birds and deer, so what, or who, comes first? And is enough money being spent in Farm Research to determine the cause?

In August 1997, Hudson Foods took 25 million pounds of ground beef off the market when its quarter-pounder patties were found contaminated with the harmful E. coli bacteria. At the same time, two of the country's top farm-based E. coli researchers were running out of funding and one was forced to lay off most of his staff.

In the 1990s, about one in 10 E. coli research dollars had been spent on farm research, even in the wake of the E. coli outbreak linked to Jack in the Box restaurants that caused a national panic.

Most farm practices have not changed since the early 1990s. Many ranchers still believe that the pathogen is best controlled at the packing plant and in the kitchen, i.e., "Farm to Table".