The residents of Valley Center have been issued reimbursement checks from Barton Solvents for clothing expenses, hotel bills and a few other incidentals after they were evacuated following a blast at the chemical company. But not everyone can be paid off so readily.

(Barton Solvents tank farm sent about 660,000 pounds of chemicals up in smoke in the community of 6,000 just north of Wichita.) 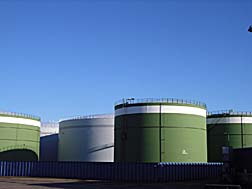 At a Chamber of Commerce meeting, one Valley Center resident expressed some concern about health issues. "He began asking questions about health ramifications related to the fire," reported the Hays Daily News. His neighbors didn't seem too concerned. "At one point, others attending the meeting essentially told the man...that he could move if he didn't like living in Valley Center or near the plant," said the News.

One [family has already moved] — that LawyersandSettlements.com knows of.

Valley residents are entitled to receive a per diem rate for each day they were out of their homes if they stayed with family or friends, or they could be reimbursed for hotel rooms, meals and other expenses if they have receipts for those items.

On August 8th, another meeting is scheduled with business owners to determine business loss but they have been asked to be patient as claims may take some time to process. Barton Solvents won't comment on how much money it has distributed so far.

Meanwhile, the cleanup is on hold while the Kansas Department of Health and Environment tests soil samples to check contamination levels and the federal Chemical Safety Board analyzes information collected during its on-site investigation last week.

As well, fire investigators from insurance companies will stall the cleanup further while they conduct their own inquiries. Barton Solvents is planning to destroy the tanks involved in the fire and replace them after it meets new codes and regulations. The tank 'farm' was built in 1979 and inspections must be conducted yearly. (Note: Where will the tanks be scrapped—at a landfill near Valley Center?) After that, Barton plans on business as usual.