Alisa Thomas was at work in South Wichita when the first explosion from Barton Solvents chemical plant started a massive fire that sent about 660,000 pounds of chemicals up in smoke. "It woke my daughter—she thought bombs were falling from the sky," says Thomas.

Day 1
"My fiancé, Jimmy, called and told me to go outside and look at the sky. I could see the smoke billowing from Valley Center. Jimmy had driven back into town and picked up my daughter Carolyn; we were told that it was a big emergency and we had to be evacuated. He put the dogs in their crates and left them in the house. 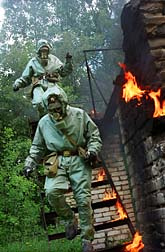 He picked me up a few hours later and we went to the coliseum to try and get some information and find out how and when we could get our pets out of the house. We were told that we couldn't get past the barricades surrounding Valley Center. By 2pm we went over to Jimmy's mother's house. I called the police and I asked what we could do. 'Am I just going to let my pets die?' I asked them.

I was just about hysterical by now, worrying about them.

We had been watching coverage of the explosion on the news. Around 4pm we decided to go back to the coliseum and get some more information. On the way, we got a phone call from a friend telling us they were letting people in with a police escort to gather pets and meds, for a few minutes only.

As we got near the barricade there was another explosion so the State Troopers turned us away. We went back to the coliseum; there were about 50 people there by this time (most of the residents had gone to relatives and friends) and some had their animals.

Some veterinarians, part of the Emergency Response team, came in and talked with us. By now, my dogs had been locked up for 12 hours and I was really worried. The vets said they weren't allowed into Valley Center but in their professional opinion, the dogs would be okay up to 72 hours without food or water. I was somewhat relieved but it was also nerve-wracking wondering if any of the fumes got into the house.

We decided to get a hotel for the night. And we had to go shopping for everything —we just had the clothes on our backs, not even shampoo or a toothbrush!

Day 2
I had a rough night and got up at dawn. I turned on the news right away and called Valley Center police station again. They told me that, based on our location, we weren't allowed back in. I inquired about my pets again but they said sorry, there was nothing they could do. My dogs had been in their crates for 24 hours, no food or water.

We went back to the coliseum and waited around, hoping to hear some news. At noon we got word that some people were allowed to walk into the southwest quadrant—where I live. I was talking with an animal rescue woman and she offered to take me in her truck as close as possible then we could walk in. We got to the drop-off point and checked in with the police. Even though the fire was out by this time, the air reeked of a strong solvent—a really sharp odor.

We walked in, grabbed the dogs and got out of there— it took about five minutes. My one dog hadn't even had a pee--it had been 30 hours! Of course the puppy went all over the crate; he didn't care. While I was there, I made sure everyone else had food and water - two birds, three rats and a turtle. We are animal lovers.

As we were leaving, my chest felt heavy and my throat was sore. I met Jimmy and Carolyn back at the coliseum and we took the dogs to a boarding kennel - they offered free accommodation. Then we went back to the hotel and paid for another night. I was so relieved that the dogs were okay; we just fell asleep for a few hours.

At 8pm I called the police and we were still not allowed back in.

Day 3
I went to work in the morning; Jimmy and Carolyn got into the house at 11am and started to clean up the mess from our pets.

It is ironic that the clean-up crew never came by my neighborhood to test the soil for toxicity levels. Why were we told to evacuate for so long if they weren't worried? What really bothers me is that they tested the soil within a radius of 350 feet from the plant and they scraped the soil to see how deep they had to go until it was non-toxic. But we don't know the state of our soil. We asked the police and they have no idea. I called the emergency number but nobody knew there either. It seems like this 'incident' has been brushed under the rug.

We were surprised that FEMA wasn't called in. After 36 hours, it wasn't even on the news anymore. How can it possibly be safe? They don't even know about these chemicals and possible long-term effects. What is the life of these chemicals, does anybody know?

We feel very uneasy because of this chemical residue. I don't even want the dogs outside -what if the grass is contaminated, what are they picking up from their paws and bringing into the house?

We are moving. Next week we will be out of here, to another town. A lot of people we have talked to think we are crazy but I grew up in LA and I've heard too many stories of situations like this turning bad after 20 or 30 years. I am not willing to take a chance on my family or animals.

We just found out last night that Barton Solvents is starting a reimbursement program tomorrow. Is that it?