Barton Solvents: Cause for Concern?

According to Valley Center City Administrator I.D. Creech, the town will be back to normal soon, and that "dirt" from the area surrounding Barton Solvents chemical plant has mainly been cleaned up. The word "dirt" doesn't seem as menacing as "toxic chemicals." Is Creech trying to play down this potential environmental disaster? 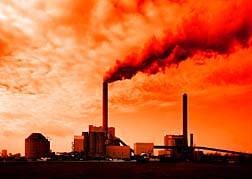 Creech also states that the chemicals are no more than "irritants" and do not pose any long-term health hazards. No doubt the people at Barton Solvents would concur—they are already talking about rebuilding the chemical storage plant.

But meteorologist Mary-Beth Schreck doesn't seem to be on the same page as the administrator. As part of the clean-up, contaminated soil had been moved from a nearby property and covered, but Schreck raised some concern when scattered showers were forecast. "I would cover that stuff up," Schreck said. "If that's a concern for them, it's not something to really play around with."

Officials confirmed that the plant's explosion occurred because of static electricity build-up in the tanks. Barton Solvents president David Casten said that every precaution was taken to ensure this didn't happen. "We're trying to investigate if there's another thing we could have done," he said. Casten also said that all 44 storage tanks were destroyed. However, the Kansas Department of Health lists 47 tanks on the property that contain (ed) numerous substances including:

Toluene is a clear colorless liquid that is used as a common solvent, able to dissolve: paints, paint thinners, many chemical reactants, rubber, printing ink, adhesives (glues), lacquers, leather tanners, and disinfectants. Toluene can enter the human system by vapor inhalation from the liquid evaporation, and following soil contamination events, where human contact with soil, ingestion of contaminated groundwater or soil vapor off-gassing can occur.

According to the Agency for Toxic Substances & Disease Registry, Toulene may affect the nervous system. Low to moderate levels can cause tiredness, confusion, weakness, drunken-type actions, memory loss, nausea, loss of appetite, and hearing and color vision loss. Inhaling High levels of toluene in a short time can make you feel light-headed, dizzy, or sleepy. It can also cause unconsciousness, and even death. High levels of toluene may affect your kidneys.

Xylene is used as a solvent and in the printing, rubber, and leather industries. It is also used as a cleaning agent, a thinner for paint, and in paints and varnishes. It is found in small amounts in airplane fuel and gasoline.

High levels of exposure to Xylene for short or long periods can cause headaches, lack of muscle coordination, dizziness, confusion, and changes in one's sense of balance. Exposure of people to high levels of xylene for short periods can also cause irritation of the skin, eyes, nose, and throat; difficulty in breathing; problems with the lungs; delayed reaction time; memory difficulties; stomach discomfort; and possibly changes in the liver and kidneys. It can cause unconsciousness and even death at very high levels.

Storage Tanks
Permits to operate the storage tanks were due to expire July 31, 2007. These permits are renewed each year and owners are required to fill out an invoice, send one copy to the state and another copy to emergency planners in their area.

Barton Solvents used aboveground tanks (AST) to store chemicals. An AST, as defined by the state of Kansas, is "90% of tank equipment located on the surface or above the floor of an underground area such as a basement." AST's that are regulated by the state must have "secondary containment" that includes "having space inside the tank to handle 110% of whatever is stored inside." This safety regulation allows for enough room to prevent leakage if the substance expands.

Valley Center Residents
Most residents who were evacuated after the explosion have returned to their homes with the exception of about 30 families living closest to the plant. Eyewitness news reports that as of July 19, only Birch and Cedar Roads remain closed. It also reported that 12 people were treated at the Medical Center for problems from the chemicals in the air.

Again, Creech is optimistic—he wants his town up and running asap. "Vapors from the remaining chemicals were still a major concern, but that is expected to go away once the source is removed," he said.