One of the nasty side effects (and there are many) of the Avaulta Transvaginal Surgical Mesh (TVM) is the inability to have sex. Obviously, this issue can have far-reaching implications, including physical and psychological problems for both women and their partners. 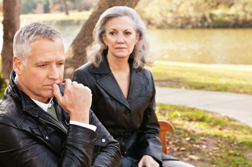 Angie, 43, has had continuous problems with Avaulta transvaginal surgical mesh, manufactured by Bard, since 2007. "Just one year after the first surgery, I had another surgery due to erosion of the mesh and TVM sling," she says. "I've been in constant pain for more than three years and my problems are far worse than before I had this mesh implanted." Angie says her incontinence is worse (she had surgery to treat pelvic organ prolapse); she has abdominal swelling and lower leg and ankle swelling, and she can't have sex.

"I'm unable to have intercourse because it is too painful," explains Angie, "and that has led to depression and frustration; as you can imagine, this issue is putting so much pressure on my husband as well—it is so unfair." To add insult to injury, Angie has been out of work for more than a year, due to incontinence problems (understandably, she is also extremely embarrassed) and her mental state.

Judy (not her real name) has gone through the same hell as Angie with Bard Avaulta TVM. Like Angie, she had a second surgery to repair the mesh erosion, is suffering from recurring incontinence and pain, and sex is out of the question.

"My husband and I tried to have sex after waiting the requisite time after surgery, and then some," says Judy. "But it was so uncomfortable and painful and the mesh scratched my husband's penis. And my vagina has been damaged due to the mesh erosion—I'm a lot worse off now than ever before."

More BARD AVAULTA TVM News
Judy first had the Bard Avaulta mesh surgically implanted in 2008, then this past August 2011, she had another vaginal sling with cystocele ((bladder drop) repair, "But once again I have erosion and I am in horrific pain," she explains. "Now I have had two different operations performed by two different doctors—shall I file two lawsuits? This mesh is a nightmare!"

In a press release (October 26, 2011), attorney Henry Garrard says that increased media attention on problems linked to the use of surgical mesh to treat women with pelvic organ prolapse (POP) has been a positive development. Garrard—who recently told LawyersandSettlements that women with TVM have been treated "like guinea pigs," has been handling TVM cases since 2006. "The media can help to inform the public about surgical mesh complications. That can help women who are currently considering treatment options for pelvic organ prolapse ( POP) as well as those who have already had POP surgery that involved mesh implants," said Garrard.