"Transvaginal Mesh Caused Five Years of Hell for Me, My Husband, My Kids"

Leslie was 40 years old in 2007 when she had transvaginal mesh—a TVT sling—implanted. Since that time, she has had at least six MRIs and about a dozen CAT Scans. She has been in and out of the hospital on numerous occasions—including the renal unit for three months—and she couldn't have sex with her husband until last October. "Both my husband and I want to warn women about these transvaginal mesh devices," she says. "I don't think many people realize the devastation this mesh can create." 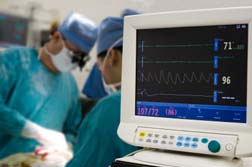 Neither Leslie (not her real name) nor her doctor had any idea of the complications associated with TVT slings and transvaginal mesh devices. It wasn't until a year after Leslie's initial surgery when the FDA issued a safety alert, even though manufacturers like American Medical Systems and Bard, the maker of Avaulta, had received more than 1,000 complaints since 2005. Leslie knew her gynecologist was using the TVT but she knew nothing about it, other than that it would "stabilize and hold her bladder," according to her doctor.

Within just a few weeks of surgery, Leslie had severe pain in her groin and a nasty urinary tract infection. Then she got lower back pain. Then it got a whole lot worse.

"My blood pressure soared from 120/90 to 210/160 in no time at all, for no apparent reason," says Leslie. "Then I got hyper-pigmentation (not a rash) all over my face, neck and arms. A dermatologist told me it was systemic: something inside me was causing it but he had no idea what it could be. Then my face and ears would flush to beet red and my blood pressure would get so high I had respiratory problems. I couldn't breathe and my heart rate would go as high as 150 bpm when I was sitting down.

"I went to ER so many times and they chalked it up to the urinary tract infection. Next up, I got edema and within three years I gained about 50 pounds (I am not a big eater and I don't eat junk food—in fact I was very athletic prior to the TVT surgery). My abdomen became so swollen it looked like I was pregnant. My voice became hoarse and then I got esophagus problems; I could never understand where this was coming from. Then I was sent to an ear, nose and throat doctor. Next came blurred vision and I lost my peripheral vision. An optometrist determined it was so bad I couldn't drive anymore. I lost my hearing in my left ear…

"My husband and I were beside ourselves."

So what does this all have to do with Leslie's transvaginal mesh surgery? It all links to her immune system. Unfortunately, it took a few years to figure that out. Neither Leslie nor the litany of specialists she saw clued in that the mesh erosion, which almost killed her, was the cause of so much pain, not to mention frustration and financial ruin.

By December, Leslie's immune system was so poor that her family physician ordered a barium enema. The technician found a large polyp in her colon and she had a colonoscopy right away. They found four massive polyps—but what caused them? Leslie was told that large polyps usually turn into cancer, but they were benign—and that was the only good news she had, right up until the end of 2011.

"I got so sick that and I couldn't walk up or down my stairs," says Leslie. "I couldn't do the laundry, couldn't do the dishes. I knew I was in serious trouble when I got half way up the stairs and my chest was so tight I couldn't breathe. I tried yelling to my 10-year-old to help me to bed. My husband raced home and I felt a bit better. The next morning I had to go for another barium swallow. This time the technician sent me to ER after he took my blood pressure: it was 240/150, but my respiratory rate was low. My kidneys were not working and no one could understand what was going on.

"An ambulance raced me to the renal unit of Sydney Hospital, where I stayed for three months. Everything was going wrong. At one time my cortisol levels were so high everyone thought I was going to die.

"My husband and my kids were losing their minds.

"I had every specialist you could imagine looking at me. They agreed it was systemic and a few doctors knew it was something auto-immune but no one figured it out."

Leslie was booked for surgery to get cysts removed from her stomach but the surgeon told her she was too sick for surgery and advised that she go home, try to get better and come back in a few months. But when Leslie got home, she almost gave up.

"Just before I decided to take all the pills on my bedside table, my friend, a nurse, came over and she, along with her neurologist friend, saved my life," explains Leslie, on the verge of tears. "I told her everything and she said, 'It has to do with the TVT surgery,' and insisted that I call a urogynecologist, who specializes in the care of women with pelvic floor dysfunction.

"By this time we were financially devastated. My husband wasn't working because he was taking care of me, but we had no choice.

"The urogynecologist did a pelvic exam and right away felt massive erosion. She asked if I had a mesh implanted. Then she did a cystoscopy and determined that the TVT mesh was cutting off the right ureter. Later, she found that the mesh was also cutting off the urethra.

She said, 'You need surgery, you cannot have a foreign object in an organ.' She said the infection was so bad, 'It is going through your entire system, you need to get it removed now.' That was December 2010.

"She found the mesh embedded in the urethra but she couldn't remove it. 'This is way above my skill level, I cannot do it,' she told me. But I had some relief from this surgery and I was referred to another specialist, a reconstructive urologist.

"I had yet another surgery in October 2011. He said the mesh was 'In every place it shouldn't be,' eroded in my colon, bladder, pelvic floor. He said it was one of the biggest surgeries he had ever done.

"Now I feel infection-free for the first time in five years, and I don't have to take anymore antibiotics. But I'm not out of the woods yet.

"The reconstructive urologist noticed something on my urethra and he believes it is a piece of mesh. So I have to go back in three weeks. My bladder still isn't right; it takes a long time to empty and I can't hold my urine, I have no muscle left in my bladder. So I have to undergo yet another surgery.

More BARD AVAULTA TVM News
"I started to feel better and had enough energy to research transvaginal mesh online. I looked for FDA warnings and found so many women going through these problems. And I am furious.

"My husband and I also found the TVM attorney online. Right now our fight is to get me better and my attorney can go after the TVT and TVM manufacturer. My attorney has all my medical records including the lot number of the TVT sling.

"My kids and husband have lost so much because of this. Everyone needs to know that these companies are using us as guinea pigs. When I found out about the 501(k), how these medical device makers can put products on the market without clinical trials, I cried my heart out. How could the FDA allow this?

"My attorney said it is OK for me to talk about this. I just want people to know the hell I have gone through; I want this taken off the market, forever."

Posted by
Susan Anderson
on March 11, 2016
I have had 6 surgeries in the last 14 months. for removal of bladder mesh. its been 2 months since my last major surgery. I have no energy and doctor told me it will probably be 6 to 9 months before I heal from this surgery. I lost my job because I was on medical leave to long. went through a divorce after 25 years. I don't have energy to do anything with my grandkids. so overwhelmed and scared some days. Just praying for the day to get my life back. This has taken everything from me.
Posted by
Chaunda Gallien
on December 29, 2015
I also have a mesh implant and just recently found out that I have a mass on my large intestine and appendix area that will require me to have surgery on January 11th to remove part of my large intestine.... and I know it is from this mesh because I never had these issues before and have had this mesh for five years now and it's been nothing but a headache.
Posted by
Dottie
on November 4, 2015
HOW do I find out if mesh is my problem with my stomach and hips. I can't find what imaging test to ask for. No one in Delaware knows anything about mesh.
Please help.

Posted by
Lady of rage
on September 18, 2015
I to am suffering with all of the same exact problems and then some. I had the surgery done twice so far and from all of the information I've gathered looks like I'll be having another one to remove this before it kills me. I understand the frustration with a team of specialist who don't know what to do, and having to do my own research to shead some light on this horrifying nightmare of a life I'm living. To abuse women in this way is almost inconceivable. I see that I'm not alone in this. Somebody somewhere please pray for me. I have grandchildren to watch grow up. They are the light of my life. The only reason I'm still holding on
Posted by
Charlotte Scott
on March 16, 2015
My mom now 74 years old has colon cancer. sometimes I wonder if her sling caused cancer of her colon. She had so many bladder and UTI infections I cant count. She did have sling removed and other items tried and didn't work. She has to take medication to prevent her bladder infections and help with urinary problems. She still has no help for her prolapse that were suppose to fixed with the sling. Now she will endure radiation and chemo, then surgery because they have found small 20 cm of cancer on rectum wall.