Patsy contracted a MRSA infection after knee replacement surgery and has undergone a number of revision surgeries since. She blames the Bair Hugger Forced Air Warming blanket for causing the infection. 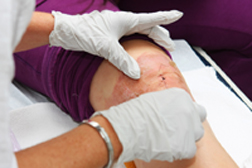 Bair Hugger lawsuits have been filed against 3M Health Care by hundreds of hip and knee replacement patients. They allege the blowers stir up contaminated air from the OR floor and deposit it into the surgical site, causing deep joint infections that resulted in the need for repeated surgeries, amputation and other complications.

Patsy has been disabled since her initial knee replacement surgery 10 years ago. This is her story - in a nutshell…

“Soon after surgery my physical therapist noticed I had less range of motion. After getting bounced back and forth from one surgeon to another, tests showed MRSA. It took about a year until I was able to get the artificial joint removed. At that time, I was pumped with antibiotics IV for about eight weeks.

“In February 2008, I had a second knee replacement but there were still signs of infection. I was referred to a surgeon who dealt with difficult cases and had a third replacement. This time I was kept in hospital for much longer. I was home for a few days when I fell off my walker and broke my hip. ‘Why are you back here?’” the nurses asked.

“The metal in this knee replacement was bothering me so much that I had it replaced in 2011. By this time I had seen doctors at the University of Virginia Hospital, Duke Hospital and my Utah surgeon. One surgeon told me that once there is Osteo-Myelitis, an infection of the bone, it never goes away. So much of my bone has been destroyed and so much loss of soft tissue that there is nothing to attach a replacement to - there is no way to fasten the tendon to the bottom part of the knee cap.

“I don’t believe the infection ever went away either. The last surgeon I consulted said that always a few MRSA cells remain. If I had the other knee replaced, I would end up with Osteo-Myelitis in that replacement as well because infection travels. I guess that is what happens with the Bair Hugger - it transports infectious cells.

“My last option is amputation. I was in good shape until I got this infection. And it made my other knee worse. It has been very difficult and painful. I have constant pain and very little movement in my knee. I have to wear an immobilizer all the time unless I can loosen it in bed. And a walker - which I never got used to.”

One surgeon told Patsy that “You have been through hell and I wouldn’t wish that on my worst enemy.” It is possible that the forced air warming blanket was Patsy’s worst enemy. When she found out that this warming blanket is facing allegations about infections in knee replacements, she decided to file a Bair Hugger claim, even though her medical records do not indicate that she had a warming blanket during surgery. “I’ll leave my medical records with the attorneys to determine that,” she adds.

In another case, again similar to Patsy’s complaint, Richard Smith filed a lawsuit in the U.S. District Court for the Eastern District Court of Louisiana against 3M Co. and Arizant Healthcare Inc., citing negligence, misrepresentation, fraud and deceit, breach of express warranty, breach of implied warranty and violations of the Louisiana Products Liability Act. He claims that a defect in the design of the Bair Hugger caused contaminants to be blown into his open surgical wound during knee surgery in 2011 and resulted in the contamination and infection of the wound site. Smith claims to have undergone additional surgical procedures because of the infection.
READ ABOUT BAIR HUGGER LAWSUITS

Posted by
Kim
on July 9, 2016
I had a mastectomy and developed MRSA, weeks of antibiotics and additional surgery. I have a lawyer...
Posted by
ML
on July 3, 2016
It's NOT just Hip and Knee Replacements that are affected. Broken Ankle with ORIF and plate and screws. Within a week of having cast removed, a hole developed in my ankle. Had been in casts for 9 weeks! Staph infection and hole for 6 months until I found surgeon to take hardware out. Has healed wonderfully. My attorney found that a Bair Hugger was used in my surgery.
Posted by
Matthew Morgan
on June 23, 2016
I had a knee replacement and it went really wrong it got infected right after the i had to have the knee replacement removed and they put an antibiotic pacer in my leg with no knee at all so i was in the hospital for about 6 months on IV antibiotics then i had to have a revision surgery i have been threw hell and back to find out i never walk again!!!!!! All the muscles in my entire right leg are gone so now i am on methadone 10 mg thanks doc!!! Someone needs to be held responsible!!!