No one in the medical community so much as hinted to Calvin that the Bair Hugger warming blanket could be the cause of several infections he developed after a routine knee replacement surgery. 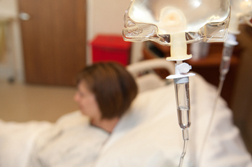 “I had a total knee replacement surgery about four years ago and I’ve had reconstruction and revision surgeries since. Almost every time I wound up with an infection,” says Calvin. “I keep getting these revision surgeries because I don’t think the device is strong enough for my weight, and they have to keep dealing with these infections.”

Calvin, who is 320 lbs and just under 6 ft., suffered the worst infection in 2013 when he was hospitalized for several weeks with a bacterial infection he couldn’t shake. And being pumped with so many antibiotics causes its own set of complications. During that long hospital stretch he heard that a forced air warming blanket was used during his surgery (the blankets are most often used during hip and knee replacement procedures), and that the hospital regularly uses them. But he didn’t know about any complaints until last summer, when a California man filed a Bair Hugger lawsuit against 3M Company and its Arizant Healthcare subsidiary.


“I’ve been sick ever since my initial knee replacement; I just don't have any energy left,” says Calvin, age 59.
“I stayed in good shape all my life until this happened. I was in the Marines for eight years and the National Guard for 10 years. I always stayed active and was heavily into competitive sports. But all these infections and surgeries caused me to gain weight and I've slowed down. All I can do now is drive to therapy, drive to my doctor and go back to bed when I get home.”

Calvin says he is mainly suffering from fatigue and ear infections. He hasn’t been able to work but was denied disability benefits. “Trying to get benefits is a whole different story here in Alabama,” adds Calvin. “I have challenged Social Security so often, I think I have a black flag on my file. Since my first surgery and subsequent infections, there is no disputing that I am disabled. They tell me that I have to wait until I am 62 years old.

More BAIR HUGGER News
“Meanwhile, I'm just hanging on, and trying to stay out of the hospital. Living like this sucks, but I just have to keep going. I am pretty mad at the Bair Hugger maker. Apparently they knew this warming blanket increased the surgical risk of infection for several years but they chose to hide that information.”

According to Reuters (August 2015), of the 14 hip and knee replacement lawsuits filed alleging serious deep joint infections due to the Bair Hugger, one plaintiff filed a motion with the U.S. Judicial Panel on Multidistrict Litigation (JPML) to have all federal claims consolidated in the U.S. District Court, District of Minnesota, “in order to reduce duplicative discovery, avoid conflicting pretrial rulings, and serve the convenience of the parties, witnesses and the courts.” To date, 3M and Arizant are opposed to centralization. The proposal will be addressed on December 3 by the JPML. (In Re: Bair Hugger Forced Air Warming Products Liability Litigation - MDL No. 2666).
READ ABOUT BAIR HUGGER LAWSUITS