One of the fastest growing multi-district litigations (MDLs) this summer is Bair Hugger surgical blankets, according to Reuters. 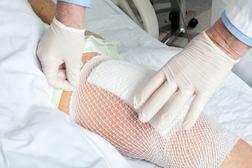 Another Bair Hugger lawsuit was filed August 11 by a New York family, which adds to the 457 pending lawsuits - either in federal or state court in Minnesota - against 3M and Arizant Healthcare. (The US Judicial Panel on Multidistrict Litigation granted the plaintiffs' motion to transfer and consolidate all cases pending in federal courts to the District of Minnesota to be managed in a multi-district proceeding during the pre-trial phase of the litigation.)

Raizner Slania, an attorney in Texas, filed suit on behalf of a New York family after the husband developed a deep joint infection, allegedly caused by the Bair Hugger warming blanket during surgery.

Deep joint infection occurs when bacteria is able to grow because the body’s natural immune response is unable to fight it off. Most patients who have filed Bair Hugger lawsuits underwent knee or hip replacement surgery or cardiovascular surgery. Their allegations most commonly assert they have been infected by Methicillin-resistant Staphylococcus aureus (MRSA) and known as healthcare-associated MRSA (HA-MRSA) acquired in hospitals following surgery.

More BAIR HUGGER News
According to a news release issued by the State of Texas, the plaintiff required additional surgeries and antibiotic therapy after the contaminants entered into his body during surgery that caused him to develop the infection. The Bair Hugger lawsuit claims the plaintiff suffered physical pain and extreme economic loss from the additional surgeries and treatments. The plaintiff’s spouse also suffered a loss of consortium and loss of services.

Further, the couple accuses 3M and Arizant of the following:
• Gross negligence in their failure to warn patients
• Designing and Manufacturing the defective Bair Hugger warming blanket
• In breach of the implied warranty of the merchantability the companies
• Violating the Consumer Fraud and/or Unfair and Deceptive Trade Practices Law of the state of New York.

Since 1987 the Bair Hugger forced-air warming blanket has been used in more than 200 million surgeries. Attorneys for 3M and Arizant (3M bought Eden Prairie-based maker of the Bair Hugger in 2010 for $800 million) say that no study has proved that it causes surgical infections. But the number of Bair Hugger lawsuits being filed daily would disagree.