With four out of five US hospitals using the Bair Hugger warming blanket, and more than 100 million surgical procedures performed in the United States, a number of forced air warming blanket lawsuits have been filed alleging the use of the blankets let to infection and additional complications. 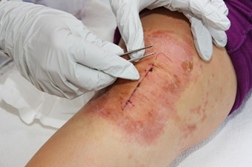 Since the FDA approved the Bair Hugger in 1988, the single-use device has been used on more than 180 million patients. The Centers for Disease Control and Prevention reports that 719,000 total knee replacements and 332,000 total hip replacements were performed in the United States in 2010. And the Mayo Clinic reports 7.2 million Americans are living with implants. What isn’t known is how many of the patients involved in these surgeries developed an infection during surgery.

Most forced air warming blanket lawsuits have been filed by hip and knee replacement patients. If bacteria accumulates on metal or plastic joint implants, it is difficult for the patient’s natural immune system to attack that bacteria, unlike most infections in the blood stream that can be attacked by the immune system. To compound the problem, orthopedic surgeries typically take a long time, which can mean infectious bacteria may have more time to spread in the operating room.

More BAIR HUGGER News
Deep joint infection can lead to serious complications, including amputation. A Bair Hugger lawsuit filed this month alleges the device caused infection in a knee replacement patient and her limb had to be amputated.

Hip and knee replacement plaintiffs who have filed Bair Hugger lawsuits claim that the device is defective, as allegations state it could cause the surgical site to come into contact with bacteria and other contaminants from the operating room floor. Further, it is alleged the manufacturer was aware of the risk for many years but failed to warn the medical community or make design changes.

As of December 2015, more than 12 Bair Hugger lawsuits filed in federal court have been transferred to the U.S. District Court, District of Minnesota, where a multidistrict litigation has been set. Attorneys anticipate that many more claims will join the MDL (In Re: Bair Hugger Forced Air Warming Products Liability Litigation - MDL No. 2666).
READ ABOUT BAIR HUGGER LAWSUITS