It’s been a little over a year since plaintiff Ruth Childers from Texas filed her Bair Hugger lawsuit against 3M Co. and three other defendants, alleging the forced-air warming blanket system caused a drug-resistant infection that cost the plaintiff her leg. Childers is suing for more than $1 million in compensation by way of her warming blanket lawsuit (Ruth E. Childers v. 3M Company et al, Case No. 2015-73957 in the US District Court, Harris County, Texas). 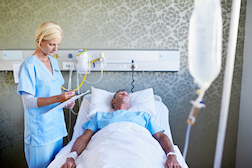 Since then, other Bair Hugger warming blanket lawsuits have come to the fore, with more than 800 housed within multidistrict litigation. Bellwether trials are scheduled for later this year, in an effort to test the litigation waters.

The Bair Hugger is a forced-air system that brings warmed, ambient air to the surgical patient draped in a disposable blanket during surgery. Given the need to keep surgical theatres cool to aid in reducing the spread of bacteria and to contribute to the alertness of surgical staff, it has been determined that warming the patient during surgery aids in healing and promotes blood flow. A forced-air unit warms air ingested into the unit from floor-level, and delivers it to the warming blanket draped over the patient through a conduit of forced-air.

The allegation is the system, when fully activated, inadvertently collects bacteria and pathogens lurking at floor level and provides a pathway of potential infection to the patient, and specifically the surgical site. Thousands of hospitals around the world have since adopted the technology.

The various parties in the Bair Hugger MDL (In Re: Bair Hugger Forced Air Warming Products Liability Litigation - MDL No. 2666) are to make their nominations from a pool of potential lawsuits by January 20. Bellwether lawsuits are to begin by November of this year.

One of the more recent lawsuits was filed by plaintiff Jill Schlueter and her husband from Illinois. According to court documents Schlueter underwent knee replacement surgery on February 19, 2013. A Bair Hugger warming blanket was used during the procedure. The plaintiff subsequently developed a methicillin-resistant staphylococcus aureus (MRSA) infection which she claims was caused by the Bair Hugger blowing airborne contaminants onto the open surgical site.

Joint replacement procedures such as knees and hips are thought to be particularly susceptible to deep joint infection.

3M noted in its Form 10-Q Report filed with the US Securities and Exchange Commission (SEC) November 1st of last year that it faces – as of that date – about 830 Bair Hugger lawsuits consolidated in multidistrict litigation in Minnesota, together with a putative nationwide class action in US District Court for the Western District of Tennessee.

The defendant is also facing a putative class action in Canada, filed in June of last year in the Ontario Superior Court of Justice. 3M is not the original developer of the Bair Hugger, but rather acquired the troubled product when it acquired Arizant, Inc. in 2010.