There have been many bad faith insurance stories, whereby insurance companies happily collect premiums but balk at paying out claims. This is one such example. But this is one story that has the hallmarks of the most cruel and punishing of blows to the survivor of a good man lost to a car accident. 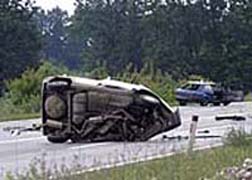 In this case, Todd Pierce—a faithful Catholic from Billings, Montana, who battled squamous cell carcinoma in his nasal cavity after he was diagnosed in 1999. He battled the cancer bravely, and within two years of diagnosis was cancer free.

But that's only half the story. Over the next eight years Pierce underwent as many as 40 surgeries to rebuild his jaw and palate to repair the damage caused by cancer. He was on medication for pain, but nothing more when a car accident in 2009 took his life. Pierce had been driving home from a family reunion when he lost control of his pickup truck. At 5:25 pm on July 5, 2009, his vehicle rolled down an embankment and burst into flames. Pierce died of smoke inhalation.

Although the insurer, MetLife, sent Pierce's widow Jane a "checkbook" to begin tapping into the proceeds of a term insurance policy, the insurer appeared to stonewall Todd's widow with regard to the payment of a claim for accidental death. Instead, according to Bloomberg News, she was overrun with requests from MetLife seeking forms, medical records and other records. Jane duly complied.

It wasn't long before MetLife, in an unsigned letter, decreed that the accidental death claim would be denied because, in MetLife's view, Todd Pierce had taken his own life.

The decision by MetLife appeared to be based on a report suggesting a finding of toxic levels of Tramadol, a painkiller, in the deceased's bloodstream. Tramadol is a painkiller prescribed to Pierce by his doctor. The associate medical examiner for the state of Montana happily explained to MetLife that "This Tramadol elevation is an artifact of the severe damage Mr. Pierce's body received following the crash and is not a result of taking sky-high levels of the drug," Bennett wrote. He said the drug wasn't the cause of death.

More BAD FAITH INSURANCE News
No matter. MetLife stood by its view that Pierce had overdosed on Tramadol, and therefore was responsible for his own death.

Pierce's widow hired the services of a bad faith insurance lawyer, who filed an appeal with MetLife on Pierce's behalf. MetLife allegedly ignored the appeal. It was then that Jane Pierce filed a lawsuit against MetLife in federal court in Billings, for breach of contract.

Following another delay, MetLife eventually recanted and paid the full amount of the death benefit—$224,000—under the terms of the accidental death policy. However, MetLife did not admit to any wrongdoing and was not required to pay any interest or penalties for delaying the payment of Pierce's settlement. The $224,000 claim came a year after Pierce's tragic death.
READ ABOUT BAD FAITH INSURANCE LAWSUITS