A Trio of Auto Accident Related Back and Neck Injuries

Last month, oddly enough, three separate back and neck injury lawsuits stemming from rear end car accidents were filed in Illinois within three days of each other. 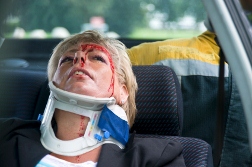 In Hausmann’s complaint, Natalie Williams rear-ended her when Hausmann stopped for traffic. Hausmann claims she sustained neck and back injuries, experienced severe pain and suffering and was hindered from attending to her normal duties. Her lawsuit further states that she lost large sums of money and incurred medical costs due to Williams’ negligent driving, which caused the collision. She is seeking more than $50,000 plus court fees and any costs incurred from Williams.

Mary Klund was a passenger in a vehicle that was also rear-ended. According to her complaint, Klund suffered severe pain and mental anguish and endured an impaired ability to work, along with medical costs of $15,000 and lost wages.

And Lena Stockard is also seeking $50,000 after she sustained back and neck injuries along with chest, shoulder and wrist injuries after Jacoby hit the back of her car when she slowed down for a car turning in front of her. According to Stockard’s lawsuit, Jacoby failed to reduce his speed and struck her vehicle.

More BACK AND NECK INJURY News
Rear end car accidents are likely the most common type of car accident, and back and neck injuries are the most common type of injury sustained from a rear end collision. Victims are typically taken by surprise and suddenly jarred by a rear end crash as they slow down in traffic or come to a stop at a traffic light. Injuries such as whiplash are common. Some rear-end accidents miraculously allow everyone involved to walk away unscathed, but many serious injuries are common besides whiplash, such as herniation, broken bones, concussion, and brain injury.

A victim who sustained neck and back injuries from a rear-end accident in Madison County, Illinois, was awarded $140,000 in a back and neck injury settlement thanks to his attorney obtaining appropriate medical expert testimony to prove the injuries were related to the collision. Previously, his insurance company refused to accept that the man’s injuries were related to the car crash.