With the Stanley Cup Playoffs still fresh in our minds and the win by the Chicago Blackhawks of their third championship in six years, here’s a story about a back and neck injury that is alleged to have been caused during a previous playoff series between Chicago and the soon-to-be Stanley Cup champion Los Angeles Kings. 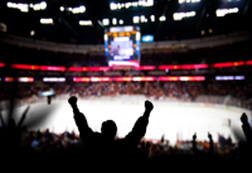 According to a neck injury compensation lawsuit filed recently in Los Angeles Superior Court, plaintiff Bruce Dobrowski was attending a playoff game between the Blackhawks and the Kings at the Staples Center in Los Angeles during the Western Conference finals in 2014. It was May 24, and Dobrowski, his wife and some companions - supporters of the Blackhawks - were in attendance to support their team at the raucous AEG-Staples Center. Dobrowski, his co-plaintiff Catherine Dobrowski and some companions were dressed in Chicago Blackhawks attire.

The anti-Chicago sentiment in the arena came to a head and Dobrowski and one of his companions were brutally assaulted and battered, or so it is alleged, in plain sight of “inept, understaffed and ineffective security,” according to the lawsuit. As a result, Dobrowski claims he had no choice but to fend for himself as best he could, but in the end was rendered semi-conscious from what the back injury compensation claim described as a vicious attack.

In addition to back and neck injury, the attack left Dobrowski with facial lacerations and fractures to the bones in his face, injuries to his hands and upper torso, and emotional distress. Those injuries, according to the plaintiffs, have negatively affected their marital relationship.

More BACK AND NECK INJURY News
The lawsuit claims that an ineffective arena staff at the AEG-Staples Center, which allegedly did not intervene in the fracas, was further exacerbated by a vast, unchecked and unlimited availability of beer and wine at the facility, or so it is alleged.

The back and neck injury lawsuit names Anschutz Entertainment Group as defendant, and alleges violation of safety statutes. The Dobrowskis allege loss of consortium and are seeking $1.5 million with help from their neck injury lawyer. The Chicago Tribune (6/8/15) reports that Catherine Dobrowski was not injured in the fracas, but her husband has reportedly racked up in excess of $35,000 in medical bills and has lost about $20,000 worth of income as a result of his injuries.

The neck injury compensation lawsuit was filed last month. The case is Dobrowski v. Anschutz Entertainment Group, et al., Case No. BC582976 in the Superior Court for the State of California for the County of Los Angeles.