Back and Neck Injuries Result in Lawsuits 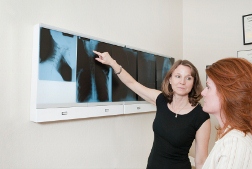 Meanwhile, in one lawsuit, Ford Motor Co. was ordered to pay $2.9 million to a man who was injured in a car accident. According to ABC News (3/27/13), the man was driving his SUV when it was rear-ended. The accident caused his seat to drop into a fully reclined position, ejecting him headfirst into the backseat. The victim reportedly suffered upper neck and head injuries, and has cognitive and visual problems as a result. The Daily Camera (3/26/13) reports that a jury found the driver’s seat was defective and awarded the man $2.9 million for economic and non-economic losses, as well as permanent injuries.

Meanwhile, in a different accident-related lawsuit, a man was awarded $4.2 million in his lawsuit against Nissan. The Star-Ledger (3/21/13) reports that the victim was driving his car when a runaway tire landed on the roof of his car. The roof caved in, fracturing the man’s neck. He alleged that the header panel on the Nissan Altima he was driving was defective, which allowed the roof to cave in. The plaintiff reportedly had to learn to walk again, suffers ongoing spasms and is unable to play sports.

More BACK AND NECK INJURY News
Nissan denied any defects associated with the vehicles and said it was reviewing its options. The company argued during the lawsuit that based on the speed of the tire and the car involved, any car would have experienced roof buckling.

Of course, not all back and neck injuries are caused by car accidents. Some are caused by seemingly innocent falls, in which the patient lands with enough force - or at an awkward angle - to cause injury. Such was the case with a man who filed a lawsuit against Fairmount Park, a horse race track. According to The Madison-St. Clair Record (3/27/13), the plaintiff alleges he fell on a wet floor, injuring his back, neck and knee. His lawsuit (Madison County Circuit Court Case No. 13-L-237) seeks more than $50,000 for medical bills and lost wages.