More AVASTIN News
US researchers concluded recently that Roche's Avastin injection is as effective as its more expensive eye drug Lucentis in treating vision loss due to macular degeneration, but comes with more side effects. 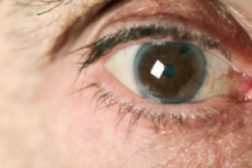 Reuters reports that the effect of Avastin was equal to that of Lucentis after one year when given monthly to treat the condition. Additionally, the rates of death, stroke and heart attack were similar, according to researchers in the National Eye Institute study.

However, doctors may be wary of prescribing Avastin to patients due to the higher rates of systemic side effects requiring hospitalization that were observed in the study. The researchers said that 24.1 percent of patients in the Avastin group experienced such side effects, while 19 percent experienced them in the Lucentis group.

"It means that the Lucentis franchise won't be threatened," Vontobel analyst Andrew Weiss told the news source. "If Lucentis is the safer drug, then it is the better drug. Whether or not it is worth such a big price tag is another issue."

Avastin, a cancer drug, is typically used with chemotherapy to treat the disease in the colon or rectum, according to the National Center for Biotechnology Information.