Patient Worries His Heart Problems Related to Avandia Use

Dennis W. is not positive his medical problems are related to his use of Avandia. However, he says that he took Avandia for a long time, quitting after he learned that Avandia was linked to heart problems. Since the time in which he had started to take Avandia, Dennis has endured stent implantation, bypass surgery and surgery to repair his sternum following bypass surgery. 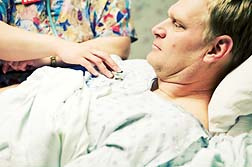 "Well, I took Avandia for my diabetes," Dennis says. "I quit taking it because I saw that it had heart warnings. Shortly after I quit taking it, I wound up with some blockages [in my arteries] and I had to have two stents put in. Then, about nine months later, they found another major blockage. The doctor did a test and told me that I needed surgery. So I had two bypasses done."

Dennis says that before this time, he had never had any problems with his heart. He is not certain when the heart problems started, possibly while he was still taking Avandia, and says he was only diagnosed by accident, after he switched to a new doctor who wanted him to undergo a full work-up.

"A year after the heart surgery, I went back and had to have more surgery because my sternum was not healing from the bypass surgery," Dennis says. "During the sternum surgery, they put in three straps and 38 screws—I have to live with those from now on.

Of course, nobody said anything about my heart problems being drug-related, but now we're finding out that drugs can cause problems. I was taking the Avandia, but after they [the US Food and Drug Administration] came out with the news about heart failure, I didn't want to take it any more. The drug companies are getting rich but I'm getting nothing from the drugs. They don't seem to do any good. I was on Avandia for a long while, now I'm on other drugs for the rest of my life—Aspirin and Plavix. I'm spending a fortune on medicine.

It's been one thing after another when it comes to this. I've missed a lot of work because of these surgeries."

More AVANDIA News
Avandia is used to treat Type 2 diabetes that has been linked in some studies to an increased risk of heart problems, liver failure and fractures. On November 14, 2007, the FDA announced that Avandia's warnings would be strengthened to include information about a potential risk of heart attacks. Recently, a study published in the British Medical Journal (August, 2009) found that Avandia had a higher risk of heart failure and death than rival drug Actos. Meanwhile, a second study, published in the Archives of Internal Medicine (August, 2009), found that Avandia has an increased risk of fractures when compared with sulfonylureas (a class of drugs used to treat diabetes). The study found that Avandia increased the risk of fractures in women by 17 percent.

Avandia is manufactured by GlaxoSmithKline.