Dave J. (not his real name) says he is not sure how long he took Avandia for, but he says he was definitely on the medication for a while. Since he took Avandia, Dave has had a number of medical problems, including at least one massive stroke; Dave believes those medical problems may be linked to his use of Avandia. Following his medical problems, Dave has been unable to return to any of his jobs, which included being a high school teacher, an adjunct professor and a part-time deputy with the sheriff's office. 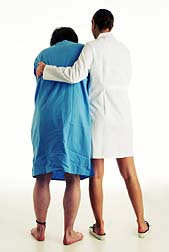 In 2006, Dave was with a colleague who noticed that Dave did not look well. Dave went to the hospital, thinking he might have been having a heart attack or a stroke. At the hospital, tests were run and Dave was told that nothing was wrong with him. Prior to this incident, Dave had some problems with his kidneys. Despite being on antibiotics, his condition was not improving, so he was admitted to the hospital for kidney problems.

"While I was in the hospital, they poked and prodded me," Dave says. "On the night of day 3, I had a massive stroke. I was unable to speak—I had a left side stroke. There was a 60 percent blockage in my cerebral artery. I couldn't move very well and I couldn't speak. My speech started to come back 3 days after the stroke. My wife could understand me if I spoke slowly. As a teacher, speaking is your livelihood. My right hand and right arm were paralyzed.

"The doctor did test after test on me and said that my kidneys had completely failed so I had to go on hemodialysis. Then, I went to a teaching hospital in Atlanta for more tests. They checked me and poked and prodded at me and they said I had 60 percent blockage in my artery. At the time, they said it was not a case of if I would have another stroke, but when I would have another stroke. They recommended surgery similar to a heart stent, but it was a brain stent instead and it was put in my cerebral artery, in my left temple.

"The day following the surgery, I felt 100 percent better. Then, in March of 2007 I felt strange and thought I was having another stroke. I went to the hospital and I was in a lot of pain. It turned out that I had 100 percent blockages in 2 arteries. The doctor said, 'Your arteries are so blocked that we can't do anything. The good news is that people's heart function is never over 60 percent and you're right at 60 percent. It looks like you have such a big heart that the rest of your heart took up the slack for those 2 arteries and rerouted the blood.'

"I followed the doctor's instructions and had to go back in November for a stress test. In December, I went back in for the results. The doctor came in, sat down and said, 'You have half the heart function you had in March. I don't know what has happened between the last time you were here and now. Your heart is operating at 30 percent. I can't do any surgery because you wouldn't live through the operation. Your heart is not strong enough and your kidneys aren't working.'

"I asked how long I had to live and he said that if things didn't change, I had about a year. That was pretty devastating to hear. That was over a year ago and I feel like I'm getting stronger. I struggle with my memory—I can't remember exactly when I started taking Avandia, but I'm trying to find out.

More AVANDIA News
"What I'm angry about is if it [his health problems] were something they [the drug makers] could have prevented and now my family is suffering because of it. Theoretically, I had 13 to 14 more years to teach. I worked out my retirement fund so that by age 64 I would have $400,000 in cash. I was planning for my retirement. I wanted to be able to live out my life in comfort. That's stopped. It's frustrating. I had to take antidepressants because I got so upset. When you work at something you like to do, it's not work, and I really enjoyed what I did.

"I'm home every day; my wife gets upset if I drive because of the medication I'm on. It makes me angry—was there something they knew? I believe in the court system. If my health problems were because of something I did, I'll take responsibility but it makes me mad if it's because of a pharmaceutical company covering things.