Avandia –Two Weeks to Near Death

Dennis is just 40 years old. He was diagnosed with type 2 diabetes and was put on Avandia. But after only two weeks on the drug, Dennis experienced shortness of breath and chest pains. He had a heart attack and he thinks Avandia could have been the cause.

Dennis's story is unusual in that he suffered a severe, near death experience very soon after starting on the drug. And, he didn't experience any massive water retention while taking Avandia – not even a small amount of edema. Many people, but not all, report experiencing water retention, shortness of breath and chest pains prior to a having a heart attack or heart failure. 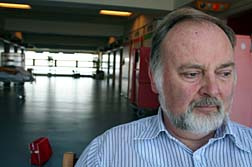 But Dennis did experience shortness of breath. "It started about 5 or 7 days after I began Avandia," Dennis said. "For some reason my blood sugar was extremely high. Two days before my heart attack my blood sugar spiked. I was very lethargic. I had shortness of breath, and it was all I could do to get around, so I went directly to the doctor, and he put me in hospital. I started having really severe chest pains, which spread to the top of my shoulder and arm. The staff brought in a portable EKG, and gave me a shot of nitro-glycerine. It took 3 doses of nitro-glycerine before they could stabilize me. In fact, the chest pains got so bad I asked for a Catholic priest."

Thankfully, Dennis lived, and did not need the Catholic priest. But, he fears his health has been permanently compromised. "It was very scary. I have no history of heart disease."

Avandia, or rosiglitazone, as it is known generically, is a widely used diabetes drug. However, a study published in The New England Journal of Medicine on May 21, 2007, showed that it raises the risk of heart attacks and possibly death. Researcher Kathy Wolski and Dr. Steven Nissen, chairman of cardiovascular medicine at the Cleveland Clinic, reported a 64 percent increased risk of heart-related death and a 43 percent increased risk of having a heart attack among patients taking Avandia.

More AVANDIA News
Even though Dennis was taken off Avandia after his heart attack, he continues to need monitoring, and is very grateful to have health insurance. He would like to find legal help. "I didn't know anything about Avandia, but I started doing some research on the drug after the fact," he said."I was very surprised by what I found. It seems to me that it wouldn't be too much to assume that the Avandia might have had something to do with this. Reading other people's stories–people my age having the same kinds of problems–really surprised me. Also, reading what had happened to other people helped me to ask the right questions. I'm glad I found Lawyers and Settlements, it's a good site and was a great help to me. Hopefully someone will read my story and if their doctor is contemplating putting them on the drug it will prompt them to ask some questions they wouldn't have before. Maybe my story will help someone, and that's the main thing."