Did Avandia Cause Patient's Heart and Lung Problems?

Karen H. says that she is not positive that Avandia has caused her heart problems but it is the only drug she has taken that she says caused a bad reaction. She did not suffer a heart attack after taking but she says she believes she suffered other Avandia side effects. Although there is allegedly a link between Avandia and heart attacks, Karen (not her real name) says that it was congestive heart failure, pulmonary hypertension and a stroke that have her concerned. 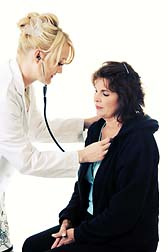 "I was diagnosed as being a new diabetic, I believe in 2002," Karen says. "Doctors were trying medications to find one that was best. After I initially started, I was on metformin, but I had some difficulty on it so they decided to try Avandia. I started it but I became ill almost immediately. It made my breasts swell and I got fat very quickly. I was not feeling well overall. Eventually the doctor took me off Avandia and I went back to metformin.

About a month later, I was at church and my foot and ankle swelled up; they were huge. I didn't hear anything about Avandia at the time and I don't think my doctor did because he didn't say anything about it. I got a doctor's appointment and found out I was in congestive heart failure and didn't know it. My heart was going crazy. The doctor put me on medication but I had to try a few medications to find the right one.

Then I had a stroke, and what scared me the most was that the MRI showed that I had previously had a stroke but I didn't know that I had one. [Karen was not told when the previous stroke would have occurred.]

I have searched and done everything I can do to figure this out. The only thing that bothered me [caused a reaction] was the Avandia.

More AVANDIA News
I think it was 6 to 8 weeks that I was on the Avandia. I noticed the side effects almost right away. I was just diagnosed as being diabetic so I was in contact with the doctor often. I noticed the side effects fairly quickly. I was complaining that I was swelling and I didn't feel good. There were issues with the Avandia and it made me feel bad. The doctor took me off it pretty quickly. From a diabetic standpoint it did well but it didn't agree with me.

It was about a month later that I had the foot swelling and congestive heart failure. No one mentioned the Avandia as a cause in 2002. At that time, no one was saying anything about Avandia; I don't think we knew to look at it as a possible cause. I have continued with the tests and everything on my heart to make sure that I didn't get any worse.

I would suggest that, if you're taking Avandia, to watch yourself. Sometimes you get busy and forget. Monitor yourself. You're the only one who's going to know how you feel. They [doctors] don't know all the time."

Posted by
Delores Leach
on October 24, 2015
I was diagnosed with type 2 diabetes in 2011 and they started me on metformin. I have not felt well since that time. My body has suffered with hot and cold spots at the same time and the perspiring has gotten worse every year. Finally we tried invockana for 15 days but it dehydrated me and I was very very tired we have recently done a stress test and they say I have an abnormality in my heart. I will be seeing a heart specialist the first part of November. I wonder if metformin has caused her problems and not Avandia.