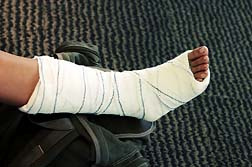 "I was on 2 different medications, but Avandia is the one that I perceive did the damage," Annie says. "I started taking Avandia because of my diabetes. I took it for over a year, and I started to feel a little strange. My muscles started to tighten, really bad. One day, I was walking and I just fell. For a little while, I couldn't move, I couldn't stand, I couldn't do anything."

Annie says that before that initial fall she noticed swelling in her legs: sometimes her legs were swollen to twice their normal size. She says she also suffered from poor circulation, dizziness and confusion, things she did not experience prior to taking Avandia.

Following that first fall, Annie says she fell repeatedly, until she was finally admitted to hospital. When there, she says she was told that she had suffered fractures in her legs, because of her falls.

Annie says she was in a wheelchair for a while and had to go through rehabilitation to learn how to walk again and more than a year after her last fall, she is getting strength back into her legs. The last time Annie was given Avandia, when she was in rehabilitation; she says her blood pressure dropped so low she almost lost consciousness. After that, she told her doctor she did not want to take Avandia anymore. Annie says that since that time, she has not suffered any of the difficulties she had while taking Avandia.

More AVANDIA News
"It's a frightening experience to be walking 1 minute and flat on your back and unable to move the next minute," Annie says. "I couldn't get up and people in my neighborhood would have to come help me. I had to call the rescue squad to pick me up, too. I cannot climb steps without holding a rail for dear life. Anything that requires me to raise my leg up, I cannot do it. It has stripped all my confidence. I'm afraid to do a whole lot of things that are normal for me. I'm afraid I might fall, even though I haven't fallen for over a year."

Avandia has been linked in at least 1 published study to an increased risk of fractures in women. The study, published in Archives of Internal Medicine in April, 2008, found "further evidence of a possible association between long-term use of thiazolidinediones and fractures, particularly of the hip and wrist, in patients with diabetes mellitus."

Avandia's side effects reportedly include excessive fluid retention, which can cause swelling of a person's tissues, and dizziness. Avandia (known generically as rosiglitazone maleate) belongs to a class of drugs known as thiazolidinediones.