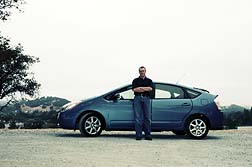 Initial concern over Toyota accelerator pedals getting jammed in poorly-fitting floor mats compelled Toyota to recall 4.2 million vehicles in November 2009. Late last week Toyota announced a second massive recall of 2.3 million vehicles. The company halted production and instructed dealers to cease and desist sales of certain models in an effort to get the problematic accelerator pedals off the road.

Late last night Toyota announced that an additional 1.1 million vehicles have been recalled.

CNN reports this morning that the list of recalled vehicles now includes the 2008-2010 Highlander, 2009-2010 Corolla, 2009-2010 Venza 2009-2010 Matrix and 2009-2010 Pontiac Vibe. General Motors' Pontiac Vibe is included in the recall because of its similarity to the Toyota Matrix, which was produced under a partnership between the two companies.

The floor mat recall suggests an obvious fix, but the sticking pedal recall is somewhat more elusive. As of this morning, Toyota had yet to formulate a remedy for the problem. The manufacturer has advised consumers to park their cars immediately and contact a Toyota dealer if they notice the accelerator pedal getting sticky and less responsive than usual.

Consumers may take comfort in Toyota's thoroughness and eye to safety, but there is little doubt that the reputation of the manufacturer is taking a huge hit.

More TOYOTA RECALL News
"They'll get through this, but I don't think it's anything they will recover from quickly," said Erich Merkle, president of Autoconomy.com, an industry analysis firm. In comments posted late yesterday on CNN.com, Merkle argued that Toyota will be hit particularly hard because so much of its sales strength in the past was based on its untarnished reputation.

"People don't buy [Toyotas] for their good looks. They don't buy it for the cash-back or financing offers," he said. "They buy them because they have a lot of confidence in the quality and safety of the vehicle."

Shares of Toyota Motor fell 4 percent in Tokyo and 7 percent in New York on Wednesday.

In contrast, Ford announced this morning that it has achieved its first annual profit in four years, posting a $2.7 billion profit for 2009. The domestic carmaker, which took a pass on federal bailout money, is forecasting a profitable position for 2010 and beyond, thanks to cost-cutting, debt reduction and popular vehicles.