Evelyn is getting nothing but grief from Toyota. When the accelerator pedal stuck on her recalled 2009 Toyota Camry last December, she inadvertently caused a car crash. The repair bill and a rental car have cost her $5,000—and to add insult to injury, Toyota made her pay $1,100 before allowing her another rental! 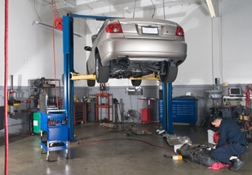 "On the morning on December 31, 2009, I wasn't able to stop at a yield sign and I hit another car, damaging the front left side of my car," says Evelyn. "My car is still at Toyota World. The accelerator was fixed as well as the body damage. While it was in the shop, I had new tires and brakes and other maintenance that Toyota recommended I needed. I wasn't aware of the recall and a service assistant just put my floor mat in the trunk; nobody at the Toyota dealership mentioned the recall. Was that on purpose? How could they not know about it?


"A service assistant just put my floor mat in the trunk; nobody at the Toyota dealership mentioned the recall. Was that on purpose? How could they not know about it?"
"Then I read about the recall and called Toyota. I finally got a claim number that took forever, due to 'heavy call volume.' Then I had to send a written letter to the claims department; they would respond in 30 days upon receiving my letter. A claims investigator hired by Toyota, Jeff Price, finally called and wanted to see the damage. But I already had the car repaired; it was sitting at Toyota world along with the bill that I couldn't afford to pay.

More TOYOTA LAWSUIT News
"Mr. Price told me that he would call the dealership and get back to me. That took another few weeks. He called back and said there wasn't anything to investigate, so Toyota would have to decide if they were going to pay the damage. He told me that I had to call the Toyota 800 number—back to where I started. So I called the 800 number and spoke to Kurt, my case manager. Kurt didn't know what I was talking about and would 'look into this matter further and call me within the week.' You guessed, it no call back. I am so frustrated.

"I just want my car back, and I feel the least they could do is cover the charges. I don't think I should have to pay for anything, due to the inconvenience (having to get rides back and forth to work) and the fact that my family could have been killed due to this problem. I had a rental car for a little over 30 days waiting for this matter to get straightened out but I can't afford that any longer. Now I have to rely on my friends to get rides to work. I don't think Toyota is going to be forthcoming without an attorney on my side."