A man imprisoned for vehicular homicide in February after his 1996 Toyota Camry slammed into the back of another car, killing three people, has formally asked for a new trial in light of the Toyota recall over rapid acceleration and sticky gas pedals. 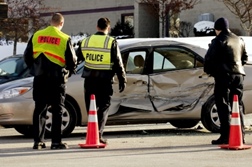 Koua Fong Lee of Minnesota was convicted of vehicular homicide in 2006 and sentenced to eight years in prison. Fong was driving his family home from church on a Sunday morning when his 1996 Toyota Camry slammed into the back of another car at a red light at the end of an exit ramp off Interstate 94.

Police estimate the Camry was traveling somewhere between 70 and 90 miles per hour when it hit the other car. Lee testified that the car was traveling at a speed beyond his control, that he did everything he could to stop, but that the brakes failed.

In a petition filed on March 23 in Ramsey County District Court, attorneys acting on Lee's behalf are seeking a new trial and provided county prosecutors with new evidence in support of Lee's statement of innocence. The car he was driving, which is impounded, will be available for inspection later this month.

More TOYOTA LAWSUIT News
According to the National Law Journal on 3/29/10, Susan Gaertner, an attorney for Ramsey County, said that while she remains open-minded about new information, "the defendant was specifically asked [at trial] if the car accelerated without him putting his foot on the pedal, and he said no." The defense argued that Lee panicked and was confused about which pedal he was pushing.

However, Lee's legal counsel stresses there is sufficient evidence to warrant a new trial. Those comments are backed by no fewer than 16 affidavits from individuals who experienced sudden acceleration in older model Toyotas. Seven involved the same 1996 model Camry Lee was driving at the time of the accident.

Lee's attorney notes that the National Highway Traffic Safety Administration (NHTSA) has received at least 15 reports of sudden acceleration in 1996 Toyota vehicles. While the 1996 model year Camry was not part of the current Toyota recall for sticking accelerator pedals, the Associated Press has previously reported that Toyota had undertaken a recall of some 1996 model Camrys for defective cruise controls that could cause sudden acceleration.

Click to learn more about LawyersandSettlements.com
LawyersandSettlements.com - A trusted, independent legal news provider bringing quality news and information on all legal cases and lawsuits filed in United States of America to its readers since 2002. Over 250,000 legal help requests including Automotive accidents, and Defective Product Cases have been forwarded to lawyers all across to the country.