The recent recall of various Toyota models for unintended acceleration and the accompanying debate over whether the problem is mechanical or electronic has been further clouded by the manufacturer's recent offer to replace the entire pedal assembly for any recalled vehicle on which an unsuccessful repair has already been carried out. 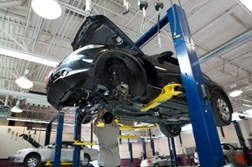 It was reported that up to 100 Toyota owners experienced sudden and unexpected acceleration after the pedals were supposedly repaired, according to analysis of government data conducted by the Associated Press (AP). More recently, Toyota indicated in an internal memo that it was prepared to replace the entire pedal assembly for Toyota owners still having issues.

"The Japanese automaker said in a memo obtained Tuesday [March 23] by the Associated Press that if a customer is unhappy with the feel of the accelerator after the car is repaired, dealers can provide a replacement pedal at no charge," AP reported.

According to CBS News, Toyota remains "confident in its repairs and has found no evidence of other problems, such as faulty electronics."

However, those who remain suspicious of the electronics have some new grist for their mills: a memorandum to Toyota dealers from the manufacturer, dated August 30, 2002, obtained by CNN. In the memo, Toyota revealed that some Camry owners were complaining about throttles surging, for which it recommended an adjustment to an electric control unit.

"The document states that some 2002 model Camry vehicles with the 1MZ-FE engine 'may exhibit a surging during light throttle input at speeds between 38-42 mph with lock-up (L/U) 'ON,'" CBS News reported on 3/23/10.

The communiqué went on to state that "the Engine Control Module (ECM) calibration has been revised to correct this condition."

More TOYOTA LAWSUIT News
Some industry watchers point out that the 2002 communiqué refers to an engine no longer offered in the Camry. The new engine and updated platform in the seventh generation 2007 to 2010 Camry are sufficiently removed from the older platform as to render the contents of the 2002 memo irrelevant to Toyota's current troubles.

However, CBS News reported in February that Toyota engineers were redesigning software in response to reports of acceleration surges as early as 2005—and that Toyota was tracking "monthly progress" in addressing "surging back-and-forth sensation at constant throttle" in 2006 Lexus hybrids.

In addition to the Lexus and the Camry recall, Toyota has also recalled a number of Avalon and Corolla vehicles, the latter of which is one of the highest-selling models in the world.