Another Bad Day for GM: A Massive Recall

At a time when talk of bankruptcy swirls about the world's largest automaker, General Motors now has a massive recall to worry about. It has been announced that as many as 1.5 million potentially defective cars have been recalled over a risk for fire. 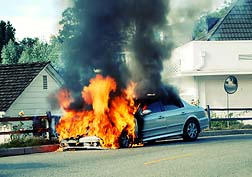 Passenger sedans manufactured between the years 1997 and 2003 are affected. It has been reported that owners of the vehicles will receive recall notices over the next month to repair a problem with the engine.

At issue is the Buick Regal and Pontiac Grand Prix manufactured and sold between 1997 and 2003. Also on the recall list are the 1998 – 2003 model year Chevrolet Lumina, Monte Carlo and Impala together with the 1998 – 1999 Oldsmobile Intrigue.

The problem originates with a naturally aspirated 3.8 liter V6 engine that uses atmospheric pressure to introduce air into the combustion chamber, rather than a mechanical blower or fan.

GM is recommending that the harness be changed, which will be done free of charge.

The fact remains, however that there are 1.5 million vehicles out there that could experience an engine fire. This could have a dramatic impact not only to the occupants of the affected vehicle, but any vehicle within close proximity.

Nor is this an isolated incident with the engine. It was reported that GM issued a similar recall last year, according to documents filed with a federal regulator in 2008. The problem in that particular case was found to be related to a faulty gasket on the engine rocker cover.

The recall was announced yesterday by the National Highway Traffic Safety Administration (NHTSA).

Owners of GM vehicles have taken some comfort of late, given federal efforts to financially prop up the massive company and float assurances that warranties will be honored, regardless of a potential bankruptcy filing.

More Defective Auto News
As for the company, such a massive recall—even for a relatively simple repair—couldn't have come at a worse time, as bankruptcy rumors continue to swirl. While new management at the automaker has expressed confidence that GM can be returned to profitability, General Motors' CEO Fritz Henderson acknowledged in an interview with the Canadian Broadcasting Corporation last week that in tandem with strategies to keep the current company afloat, GM is also preparing for a potential bankruptcy filing should the need arise. Henderson described the preparations as prudent, regardless of whether or not bankruptcy would be needed.

However, federal regulators have suggested over the past few days that General Motors should prepare for a possible bankruptcy filing by June 1st, if needed.

In the meantime car sales are continuing to tank across the industry and GM's woes cannot be expected to translate into confidence for the car-buying public. Only one new model—the 2010 GMC Terrain crossover—was debuted at the New York Auto Show, and the mood at the GM floor was quiet and downbeat. Some members of the visiting public were openly hostile.

News of this latest recall involving nearly 1.5 million defective autos will not serve to help.

Posted by
Candace Jones
on October 13, 2016
I had a 2001 grand prix in 2014 it caught on fire after I got to work. I was in the building for about two to 10 min.then one of my coworkers came in and said your car is on fire. I thank God that I was not in the car at that time I usually don't go in right away. I did on that day. So if you read this help me find a way to get some compensation for my car.
Posted by
andrea nott
on August 30, 2012
My boyfriend has a 1997 grand prix they are horrible, He bought this car from a dealership in dec 2011, the car has been on the road for 2 months all it does is leak oil over heat and the manufacture will not do anything about it.
Posted by
Lyndon Griffin
on June 11, 2012
I had a Chevy Impala that caught fire in 2009 and reported to Chevy and have also reported elsewhere on goverment sites and have documentation. Chevy came out and looked at the vehicle and said this was not due to any fault of theirs? In 2010 I received a recall notice from a dealer here in Atlanta as I bought the car used and again last week I received another from Ivory Chevrolete. I again called chevy and no such luck again. I parked my car in the lot at the appartment where I was living at the time of the fire. I had a police report filed and I would like to know if there is a way to recieve compensation for this vehicle from chevy or the individual that sold the car? Any info would help me. A year later My city was hit with a tornado and our apartment was destroyed. Why didnt this car last until then and get sweep away instead of sweeped under the carpet? LKG