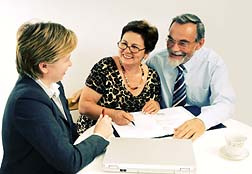 "I purchased auction rate securities from Schwab & Company after they solicited me in November 2007," David says. "The people who sold me the securities indicated to me that these type of securities, which were Jefferson County Alabama Sewer System Bonds, were insured and equivalent in liquidity to a money market fund.

"With that assurance and those representations, I purchased them in the amount of $250,000. As it has turned out, the person or persons at Schwab who sold me these securities later informed me that the auction—which I don't know much about—failed and the bonds were illiquid, meaning I could not sell them as was represented. To this day, I have not received any of my principle.

"I was told they were insured but there's nothing I can do. I've heard that there may be a website for a secondary market for the securities, but they are offering very little. Schwab won't do anything at all. They have offered me nothing for the securities.

"This was my first time, ever, with auction rate securities. People should stay away from them. The brokers lie. I've lost $250,000."

More AUCTION RATE SECURITIES News
A major problem with the auction rate securities is that investors whose money is frozen in the securities are missing out on other opportunities because they cannot access their money. They may need that money for things such as real estate transactions, business start-up costs or even college payments but they are unable to complete the transactions because their money is frozen.

Investors in auction rate securities are therefore losing out twice: first, because they cannot access their money and second, because they lose out on other opportunities and often face penalties for their inability to close on financial transactions.

Bank of America did buy back auction rate securities from investors who had accounts that were less than $15 million ($25 million for charities). However, investors with more than $15 million were left out of the settlements and have still been unable to access their money.

These investors are now filing lawsuits and arbitrations against the financial firms that sold them the auction rate securities, alleging they were misled about the safety and liquidity about those investments.