Asthma Drugs: No Cause for Asthma Sufferers to Breathe Easy…

It's been two years since the US Food and Drug Administration (FDA) last issued significant data, and updated product labels for asthma drugs Advair, Serevent and Foradil after concerns that the drugs, while lessening the frequency of wheezing attacks, could increase their ultimate severity. There has been little information since. 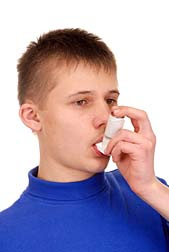 That wait could soon be over however, given the pending release of data from clinical studies requested by the federal drug regulator. Specifically, a meeting of the Pediatric Advisory Committee (PAC) in November 2007 outlined concerns regarding the ultimate safety of long-acting beta2 adrenergic agonists (LABAs) in pediatric patients suffering from asthma. The FDA made the formal request for data in January of 2008. The manufacturers of Serevent Diskus, Advair Diskus and the Foradil Aerolizer have indicated that while it would take several months to gather the data, they have signaled compliance with the request.

The data will help the FDA determine the ultimate safety of LABAs for the treatment of asthma in both children, and adults.

Bronchodilator medications such as LABAs help to relax the muscles around the airways in the lungs. Wheezing, known medically as bronchospasms, occurs when the muscles around those airways tighten. While LABAs are believed to be effective for long-term control and prevention of asthma, they are ineffective in relieving sudden wheezing.

The jury, in fact, is still out over the real benefits of LABAs. Writing in 2006, the FDA revealed that in one asthma medicine study, an increased number of patients taking a LABA in addition to their usual asthma care, died from their asthma as compared to those taking a placebo (in addition to regular asthma care). While the number of deaths in the study were admittedly small, the issue posed enough of a concern for the FDA to require that these risks be included in the product labeling—not to mention the fact that while a LABA was shown to foster a decrease in the number of asthma attacks, it also demonstrated the potential for increased severity of asthma attacks when they did occur.

That said, LABAs have been shown to help adults who choose not to allow their asthma to preclude them from living an active lifestyle. To that end, LABAs have been pressed into service for long-term prevention of wheezing brought on by exercise in adults and children, as well as bronchospasm in adults afflicted with obstructive pulmonary disease.

More News
It is hoped that the new data forthcoming from the manufacturers, will shed additional light on the effectiveness, efficacy and risks of LABAs for the treatment of asthma, especially in children. However, a later discussion on the efficacy of LABAs will cover a much broader spectrum, as the FDA has signaled that it intends to convene an advisory committee in the fall, or winter of 2008 in an effort to debate the benefit/risk assessment of LABAs in both children AND adults.

GlaxoSmithKline is the manufacturer of Advair and Serevent, while Foradil falls under the Novartis banner. While asthma medications are thought to be generally safe when compared with the untreated effects of asthma, there are serious side effects which need to be taken into account and properly considered lest—as often is the case—the cure proves worse than the cause.

In other words, for those suffering from asthma, the capacity to breathe easy is a challenge in more ways than one…