Test for Asbestosis—Don’t wait for Autopsy

Mini’s father had respiratory problems for many years before he passed away. She believes he had asbestosis lung disease caused by exposure to asbestos when he was an airplane mechanic in World War II. 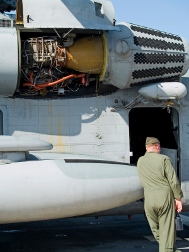 “I know I can’t file an asbestos lawsuit because he wasn’t diagnosed with asbestosis or mesothelioma or any other kind of cancer linked to asbestos, but I believe his diagnosis was wrong,” says Mini. “It makes me wonder if many other people like my dad, who worked with asbestos so long ago, have also been misdiagnosed.”

In hindsight, Mini wishes she had insisted on having her father taken to another hospital for a CT Scan. He only had chest x-rays at the VA hospital. Although a doctor can test for asbestosis by using a stethoscope to listen for high-pitched sounds or basal crackles that typically indicate the disease, a high resolution CT (computed tomography) scan is much more accurate.

“Although my dad was 80 years old, he should have enjoyed the last years of his life,” says Mini. “Instead, his lungs kept filling up with fluid and for the past ten or so years he suffered. All he got from the VA hospital were inhalers. I just want to get the word out to other people whose father may be misdiagnosed. Get proper testing or a biopsy—don’t wait for an autopsy.”

However, if a nodule or lesion is found with x-rays and a CT scan, a doctor may not be able to determine whether it is cancerous. Health professionals say that a biopsy can provide much more information, even though it is a more invasive procedure.

More ASBESTOSIS News
Furthermore, the researchers were surprised to discover that the highest mortality from mesothelioma was found among people born during 1939-1943, whereas mortality from asbestosis peaked in men born between 1924 and 1938. To explain why asbestos-exposed men born earlier are more likely to die of asbestosis, the researchers believe that asbestosis deaths may be determined by cumulative exposure to asbestos before age 45. If heavier exposure at younger ages is more likely to cause asbestosis, and exposure was more likely to be heavy between 1924 and 1938, it would explain the age differences between asbestosis and mesothelioma deaths.

Mesothelioma can sometimes take up to 40 years to manifest. If you have been exposed to asbestos, even as far back as the 1940s or 1950s, like Mini’s father was, asbestos attorneys advise that you get tested sooner than later. And insist on a CT Scan.

Posted by
Alan Sims
on December 17, 2014
I am a 62 year old male who has worked in the refineries and chemical complexes for 43 years and being exposed to asbestos for this time. I have not been tested or diagnosed with this. Two and half years ago I started experiencing chf failures shortness of breath chest pains fluid build up in the legs and stomach and dry coughs. I had to file for ssi disability May 16. I have been hospitalized 6 times due to this in the past 2 years. My hospitalization insurance has expired and cant afford to do testing at this time. What options do I have.

Click to learn more about LawyersandSettlements.com
LawyersandSettlements.com - A trusted, independent legal news provider bringing quality news and information on all legal cases and lawsuits filed in United States of America to its readers since 2002. Over 250,000 legal help requests including Personal Injury Cases, Environment Cases, and Malpractice Cases have been forwarded to lawyers all across to the country.