It’s hard to imagine that asbestosis lawsuits are on the rise, but huge corporations used asbestos up until 1989. “Many people are getting sick (or will get sick) with asbestosis and other health issues, particularly in the drilling mud industry,” says asbestos attorney Allen Vaught. “And we will continue to see cases for the next twenty or thirty years.” 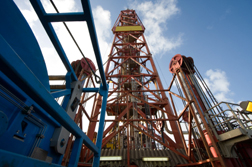 Vaught goes on to explain how corporations continued to use asbestos in the oil and gas industry, even though they knew the hazards.

“Companies like Union Carbide and Phillips Petroleum started to use asbestos in their drilling mud around 1964—up until that time it hadn’t been used much,” says Vaught. Most interesting is that 1964 was also the year that a giant convention was held nationwide, where industrial hygienists and corporate doctors made it crystal clear that asbestos caused fatal diseases like mesothelioma. “Those companies that sold drilling mud started so at or after this convention so they knew very well the hazards of asbestos. This convention was a watershed moment—nobody could have had their head in the sand after this time.”

But they did, and they got away with it. The product names Flosal, Visbestos, Super Visbestos, and Visquick were re-branded by the companies that sold them. But there were only two mother-ships that made the mud—Phillips and Union Carbide. Some companies would just sell it with that name on it and others would re-bag it and make it their own. And they kept selling it. “A sworn statement from Halliburton says it sold asbestos drilling mud until 1989,” adds Vault. Keep in mind that most big industrial uses stopped in the late 1970s (some uses remained in construction) but these big asbestos drilling bags and massive exposure continued—and they didn’t have to, but for greed and profits.

”It is critical to point out that one bag contained 50 lbs of dry asbestos powder—we are talking massive quantities of asbestos here,” adds Vault. “I saw oil wells that used tons of this material. Some of the mud was left on the ground at the well site. Some was used again—it was expensive stuff—but for the most part it was left at the location, in the mud pit, dug into the ground by a bulldozer. When the well was finished they just covered it with dirt.

(And what happened to all of that buried asbestos, 40 or so years later? “Who knows if farmer Joe is plowing into a field of asbestos?” quips Vault. “I don’t know if Joe would ever find out. It is just strange-looking dirt to him.")

How were companies such as Halliburton, Union Carbide and Phillips able to continue selling asbestos products well into the 1970s and 80s? Vault says that in the US, these companies pushed hard so that OSHA wouldn’t apply to them.

“They argued that the rigs were only here a few weeks or a few months, depending upon the well, and then they moved on. So it wasn’t really a work site,” explains Vault. “A lot of these drilling contractors relied on the statements of the asbestos companies. One company said, ‘Our asbestos is non-toxic,’ and another said, ‘Our product is OSHA approved’. And people bought into these gimmicks.”

And most insidious—these companies did ‘risk-reward analyses’. Like the Ford Pinto people (remember that?) they weighed the odds: are they better off financially to stop selling it and nobody gets sick or should they keep selling asbestos products and pay out lawsuits 40 years later, hoping that many will forget their Flosal and Visquick? They opted for the latter.

“It is sad to know that these companies estimated how many people would get sick and what the pay-out would be,” says Vault.

Vaught has handled many cases in the drilling mud industry. He recently successfully represented a wife of an oilfield worker in North Dakota. She was diagnosed with mesothelioma from washing her husband’s clothes.

“But there are many tough cases, particularly in Texas and Mississippi, because corporations have more rights than citizens so it is an uphill battle proving a case,” says Vault.

“In Texas it is like the legislature practices medicine and you must have specific criteria to meet their specifications. A doctor’s medical report may look adequate for a case on paper but that doctor likely didn’t perform every test that Texas legislature requires. For instance, you need a certain grade of x-ray reading, certain pulmonary function data and more. But the problem is that the law doesn’t match medical science. The legislature requires more than medicine to diagnose asbestosis in Texas. In other words, it is a law that protects corporations. The law is designed to prevent these asbestos claims.

"Having the Texas legislature pass laws that give these corporations a ‘Get Out of Jail Free’ card is insulting and not fair--It is hard for these victims to get justice.”

More ASBESTOSIS News
But it isn’t all one-sided. Vaught’s firm handles many asbestos cases with successful trial verdicts and settlements. “Other states have fair laws and a balanced legal system,” he explains. “But in Texas and Mississippi it is harder to win a case. However, that doesn’t mean you won’t be successful. Rather, you aren’t starting out with a level playing field in these two states. You have to fight for a long time and you can still prevail. We don’t want laws that support us, we just want fair laws.”

Vaught’s firm has obtained many multi-million verdicts for asbestos victims in the past year alone. “Sadly, we expect that asbestos lawsuits will rise in the coming decades. For instance, what about people who were exposed to asbestos cleaning up the well sites? Doctors say the rates are increasing. And they thought the stuff wasn’t used past the 1970s.”

If you or a loved one have suffered losses in this case, please click the link below and your complaint will be sent to an environmental lawyer who may evaluate your Asbestosis claim at no cost or obligation.
Request Legal Help Now

Click to learn more about LawyersandSettlements.com
LawyersandSettlements.com is an online news and information site for the general public and legal community. As a legal news resource, we have emerged as an independent & trusted voice. We provide detailed and quality information on various lawsuits filed including Environment Cases, Defective Product Cases, and Personal Injury Cases.