Even though there are strict laws governing people who work with asbestos - designed to limit their risk of asbestosis disease - employers and organizations looking to cut corners may still put their employees in jeopardy. Asbestosis lawsuits have been filed against companies whose actions are blamed for employees becoming ill with the condition. Meanwhile, three men have been convicted for exposing students to asbestosis. 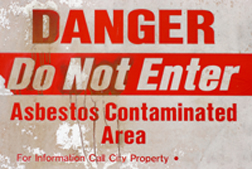 According to ABC News (3/12/13), the three men were executives with a non-profit called “Firm Build.” They used high school students to remove asbestos from a building at a former air force base but did not tell the teens they were working with asbestos and gave the students only goggles, hard hats and cotton masks as protection. The men were reportedly convicted of violating federal laws for their actions and could face up to two years in prison.

Asbestos is a known carcinogen and has been linked to serious conditions such as mesothelioma and asbestosis. Both are fatal conditions that can take years - even decades - to develop. The conditions develop because asbestos fibers can cause scar tissue to form in a person’s lung, which prevents the lung tissue from expanding and contracting properly. Symptoms of asbestosis include chest pain, cough and shortness of breath that slowly worsens over time. There is no cure for asbestosis.

There are strict guidelines for protecting people who work with asbestos to ensure their chances of inhaling the carcinogen are reduced. Under federal laws, people working with asbestos must be given full-face respirators, Tyvek suits, covers for their footwear, gloves and caps, or they must take specific protective measures to stop the asbestos from coming loose.

More ASBESTOSIS News
According to Central Valley Business Times (3/11/13), the government alleges asbestos did indeed come loose during the “Firm Build” operation. Because the asbestos came loose, students, subcontractors and employees were all exposed to the carcinogen.

Even though there are strict laws governing people and companies that work with asbestos, lawsuits are still filed on a daily basis against companies that are blamed for not properly protecting their employees. The Wall Street Journal (3/11/13) notes that personal injury lawsuits concerning asbestos are filed at a rate of 85 lawsuits per day.