Litigation surrounding the death of an underground pipe worker allegedly exposed to asbestos, demonstrates what often goes on behind the scenes that serves to shift the focus away from the victim, and onto defendants seeking to cover their financial losses. Many an asbestosis lawsuit has alleged failures on the part of employers and those responsible for work sites have resulted in unprotected exposure to asbestos, causing asbestosis disease, mesothelioma and other diseases associated with exposure to the deadly carcinogen. 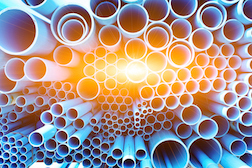 According to court documents, Carlos Tarazon was an underground pipe worker employed by the City of Phoenix for various construction jobs. Tarazon is described as having worked on a number of capital-improvement projects for the City of Phoenix as well as other enterprises over a period of about 25 years from 1968 through 1993.

Tarazon was diagnosed in recent years with asbestos mesothelioma – a malady not unlike asbestosis lung disease that often takes years, if not decades to materialize. By then, the prognosis is usually almost always dire.

About a year later, in April of 2015 the City of Phoenix agreed to settle the asbestosis lawsuit with Tarazon’s family to the tune of $500,000. The City was also facing legal bills of $986,000 for a combined total of nearly $1.5 million.

Phoenix attempted to recover those funds through its insurer, The Hartford – specifically through a series of ‘first-layer’ products and umbrella policies issued to the City of Phoenix by four units of The Hartford.

The Hartford, it seems pushed back against the claim. The City of Phoenix sued in order to compel The Hartford to pay up. However last fall a district judge in Arizona ruled that the insurer had no duty to defend or indemnify the City. In sum, the judge noted that the City of Phoenix had essentially settled the Tarazon claim with the $500,000 value of its deductible. US District Judge Neil V. Wake also said in his September, 2016 ruling that defense costs in the asbestos lawsuit were not part of the insurance coverage and should be excluded.

Phoenix appealed to the Ninth Circuit and on June 20, suggested that the lower court erred by misconstruing policies, and had applied an improper allocation protocol.

“[R]regardless of whether the first-layer or umbrella policies applied, Hartford was obligated to reimburse the city for its settlement payment and defense costs in excess of $500,000” attorneys for the city wrote.

Lost in the current legal wrangling over financial matters is the loss of a husband and father to a horrid disease that unleashed its power on an unwitting worker who did nothing more than go to work each day. His mesothelioma and asbestosis claim may have been higher in the beginning, but in the end they settled – after Tarazon died – for $500,000.

The insurance lawsuit is City of Phoenix v. First State Insurance Co. et al., Case No. 16-16767, in the US Court of Appeals for the Ninth Circuit.