If people thought asbestos litigation was about to drop off the radar, they’ll need to think again. NPR recently released a report on the “third wave” of asbestos disease, which includes asbestosis, mesothelioma and lung cancer. Now, younger people are at risk of developing asbestos-related diseases when the dormant carcinogen is disturbed and inhaled by people working around it. 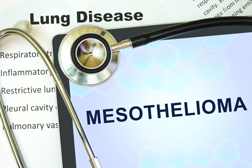 NPR (12/17/15) has a report from the Center for Public Integrity on Kris Penny, a 39-year-old father of four who worked in flooring. One day in September 2014, after drinking orange juice, Penny suffered excruciating abdominal pain. He was diagnosed with peritoneal mesothelioma, likely contracted 10 years earlier while installing fiber-optic cable in asbestos cement for AT&T.

Penny sued, saying he didn’t know he was being exposed to asbestos. AT&T says he did know and his injuries are caused by either his negligence or the negligence of others.

Penny is part of what the Center for Public Integrity and asbestos experts refer to as the “third wave” of asbestos disease. The first wave affected the miners, millers and manufacturers who worked with asbestos. The second wave affected people who worked with asbestos products, such as mechanics and construction workers. The third wave includes those who are now affected by asbestos that was dormant but is suddenly disturbed, such as asbestos in pipes or cement.

Even small amounts of asbestos exposure have been linked to asbestosis and mesothelioma. Workers have filed lawsuits against employers, alleging they were not warned about the risks of asbestos exposure and were not given proper safety gear or training to deal with the carcinogen. Regulators have also gone after employers who put employee health and safety at risk by exposing them to asbestos.

More ASBESTOSIS News
Because asbestosis and mesothelioma can take decades to develop, patients tend to be in their senior years, having been exposed to asbestos as much as 30 years ago. But sometimes, the diseases progress in just 10 years, meaning patients may only be in mid-life. It also means younger families may be affected by asbestos exposure. The “third wave” exposure, meanwhile, suggests new illnesses due to asbestos and mesothelioma could continue for decades more. There is no cure for either asbestosis or mesothelioma.

In addition to people exposed to asbestos through their work, lawsuits have been filed alleging their family members were subject to secondary asbestos exposure from fibers brought in on their work clothes and equipment. Plaintiffs in those lawsuits allege they developed serious asbestos-related conditions - including asbestosis - as a result of the secondary exposure.

Posted by
Susan Sheythe
on January 27, 2016
My cousin,63 years old and retired from a lifetime working at a family plant nursery, recently passed from 4th stage lung. Never smoked; rarely around smokers, but used vermiculite all the time. My mom also used vermiculite growing her flowers. Never smoked, etc., and died at a young 76 from interstitial pulmonary fibrosis, also a disease thought to be caused by asbestos. Why is vermiculite still being sold???