In the realm of asbestos litigation linked to serious conditions such as mesothelioma and asbestosis, there are certain professions you can expect to see making claims against asbestos makers. People who work on ships or in shipyards, those who work in construction, and mechanics, for example, all fit the common perception of “asbestos exposure.” But a lawsuit filed in Europe suggests that even seemingly benign careers could involve asbestos exposure leading to asbestosis. 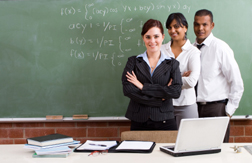 The lawsuit was filed by the family of Jennifer Barnett, who was 60 years old when she died in 2014. Barnett had worked as a schoolteacher from 1977 to 1995, and her family claims in the lawsuit that pinning student work to the walls exposed her to asbestos. According to the Daily Mail (4/8/15), Barnett had also performed work cutting sheets of asbestos in her 20s while on a farm.

Barnett was diagnosed with mesothelioma in 2013 and died 14 months later, after undergoing chemotherapy. A coroner listed the cause of death as being industrial disease after a tumor was found in Barnett’s lung. In her report, the coroner blamed the tumor on asbestos exposure. Speaking to the Daily Mail, an asbestos solicitor noted that they are seeing more and more cases of asbestos exposure involving teachers.

According to the International Business Times (4/13/15), 291 teachers in the UK have died of mesothelioma since 1980. Although that number might not seem worrying, the average number per year has jumped from three in the 1980’s to its current level of 19. Of concern to Michael Lees, the founder of the Asbestos in Schools group in the UK, are policies that asbestos is best left alone, putting teachers who pin posters to their classroom wall at risk of asbestos exposure. He calls for officials to identify schools that have the most dangerous asbestos and deal with it.

More ASBESTOSIS News
The US Environmental Protection Agency (EPA) released a pamphlet about asbestos in schools in 2003. According to that pamphlet, there are “asbestos-containing materials in most of the nation’s primary, secondary and charter schools.” That asbestos could have been used in floor and ceiling tile, insulation, pipe and boiler insulation, and fireproofing. The EPA notes that intact, undisturbed asbestos is not generally a health risk.

Meanwhile, more lawsuits are being filed against companies accused of exposing employees or the public to asbestos, putting them at risk of serious health problems. One of the issues in asbestos litigation is that it can take years - decades, even - for mesothelioma and asbestosis to develop, making it difficult to pinpoint who is responsible for the asbestos exposure. This is especially problematic in industries where workers could be exposed to asbestos from multiple sources.