Two companies face almost $380,000 in fines for allegedly exposing employees to asbestos, putting them at risk of asbestosis and other diseases linked to asbestos. The fines are related to the demolition of an apartment building in Seattle, during which time employees were exposed to asbestos and asbestos was reportedly not properly disposed of. 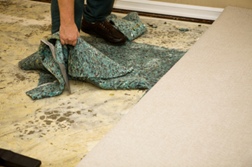 The fines were announced by the Department of Labor & Industries and were charged to Partners Construction Inc. and Asbestos Construction Management Inc., both involved in the demolition of the apartment building. In all, the department found 19 “willful and serious safety and health violations” between the two companies.

According to the Department of Labor & Industries, the investigation began after Partners Construction said it had completed all work related to removing the asbestos. A complaint was filed by an employee and the investigation found that more than 5,000 square feet of ceiling that contained asbestos, and asbestos vinyl flooring, had not been removed. The department then decertified Partners, preventing them from finishing the asbestos work.

More ASBESTOSIS News
“Asbestos is an extremely hazardous material that can lead to asbestosis, a potentially fatal disease, as well as mesothelioma and lung cancer,” the Department of Labor & Industries writes. “Removal of asbestos-containing building materials must be done by a certified abatement contractor who follows safety and health rules to protect workers and the public from exposure to asbestos.”

A person who is linked to one of the companies told KOMO 4 News (11/10/14) that they are appealing the fines. The man told KOMO 4 News that the asbestos that was found on-site was slated for removal.

Asbestos exposure can have devastating health effects, which is why there are rules designed to protect people who work with it. Health problems such as asbestosis, mesothelioma and lung cancer can develop decades after asbestos exposure. Lawsuits have been filed by employees against employers and other companies they say exposed them to asbestos without providing proper warnings or protections.