At the tender age of 16, Georgia's husband started work as a mechanic. That was 19 years ago, long enough to develop mesothelioma from exposure to asbestos in brake pads and clutches.

"Back then the brake pads and clutches were filled with asbestos," says Georgia (not her real name pending a possible lawsuit). "Right up until last year, Mike (my husband) was working with asbestos at the dealership. They say it is illegal and asbestos is not on the market or in these products but that isn't true." 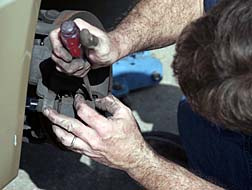 Not all industries are created equally when it comes to safety first. When Mike was 17, he had a summer job in downtown Montreal, removing asbestos from the walls of an old building. He had to wear a special suit and mask and had to shower before he wore street clothes. Not so for the auto industry. Most dealerships didn't even have ventilation in their shops and more often than not, mechanics weren't issued any safety gear.

"My father owned a garage for decades; he was OK but many others who worked with him weren't," says Georgia. "They say it takes one inhalation and about 10 years to manifest symptoms of asbestosis and mesothelioma. Some people say he isn't old enough to get mesothelioma, but Mike was diagnosed with the disease last October at a hospital here in Montreal.

About two or three years ago, Mike started to get out of breath and he was very bloated—he felt 'full' and very uncomfortable. At first, he thought it was just the hot, humid weather. He also smoked a couple of cigs a day so he quit. But he was still having symptoms. After our vacation at the end of August last year, he got a sharp pain on his right side. It was moving around, under his belly button then more to the side.

My husband isn't the type to complain at all so I was very concerned. One day he came home from work at the dealership and said he was having trouble breathing. I brought him to the clinic and the doctor examined him. Right away, because of his age, the doctor thought it was probably stress-related and he just had indigestion. But I told the doctor this was more than meets the eye and we wanted tests.

The clinic referred us to the lab for an ultrasound but the wait was a few months. You have to be in ER to get one right away. So I called a private clinic (where you have to pay—it isn't covered at all by our medical insurance) and I got an appointment the very next day. I know people are mad about having private clinics where you 'jump the line', but thank god they have it—we paid by credit card.

Mike went to work the next morning (he is a workaholic--he started work at 13 delivering papers and always had two jobs) and he went to the clinic during lunch hour. When they finished the ultrasound, Mike called me from the clinic. 'I have to be rushed to the hospital,' he said, 'because they found a lot of liquid all over my abdomen.' At that point, we didn't know what that meant. 'I'll meet you there after work,' I replied, thinking he had a busted ulcer or appendix, nothing life-threatening. Was I wrong.

He went to ER October 4th of last year and was admitted after another scan. They still didn't tell us anything. All this time he had a battery of tests. On October 17th he had to get a general anesthetic and laparoscopy--a procedure where a few incisions are made in your abdomen for the camera to look around.

They found a lot of lesions. The doctor saw me in the waiting room. 'It looks like he had a bag of sand that just burst,'the doctor said."

In Mike's case, the peritoneum—a fine fabric of the mesothelial that covers over the organs at the abdominal cavity—was affected. The peritoneum is part of the mesothelium --which has different names depending upon the position in the body. The mesothelium is a protective membrane that covers over the internal organs. Mesothelioma cancer is a disease in which the mesothelium's cells become abnormal and they divide without control or order. They can invade and they can damage organs. The majority of Mesothelioma cancer's cases begin in the pleura or peritoneum. The doctors performed a biopsy and confirmed that Mike had mesothelioma.

"When the doctor gave us his diagnosis, he asked if Mike had been exposed to asbestos," says Georgia. " 'Eighty-five percent of meso victims we see have worked in the auto industry,' he said. White collar workers don't get mesothelioma.

"Mike started chemo on October 23rd, once a week. It is making him very sick and exhausted, the whole nine yards," she says. "He doesn't like to talk about it but there are times when he is very angry.

More News
"We meet the doctors on May 5th to talk about surgery - they are going to remove his spleen, gall bladder and parts of his intestines and he will likely be left with a bag afterward. I still don't know if this is going to cure him, relieve his symptoms or buy more time. On May 21, he is scheduled for major, life-threatening surgery that will take about 10 or 12 hours.

Meanwhile, we are still waiting for workers' compensation approval--he hasn't worked since last October. He is on long-term disability but he is entitled to compensation." Georgia says that she has so much on her plate right now, working full time, looking after her kids and taking Mike to the hospital that she will have to take a leave of absence.

"I am so upset, you have no idea what I am going through," says Georgia. "We have two children—six and 10..." As for the prognosis, Georgia is too scared right now to ask. "I lost my father three years ago and I just don't want to go there."