Lorraine's husband passed away last month after a long struggle with non-Hodgkin's lymphoma. He was only 53 years old. Although asbestos mesothelioma is not mentioned on his death certificate, questions that doctors asked Lorraine haunt her. "The pulmonologist and the infection control doctors asked me frequently if he worked around asbestos," Lorraine says. 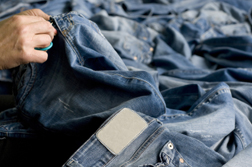 "Enrique, my husband, worked at the Levi Strauss plant for many years—he worked with rolls of materials," Lorraine explains. "Even when he was promoted to the offices, there was always a blue tinge on his clothes and even on his chest, and he constantly had nosebleeds. He was always blowing his nose, but he never had a cold."

Lorraine, 50, says that she never looked for white dust that may have indicated air-borne asbestos, because she was so concerned about the blue dye, which was known to contain a number of toxic chemicals (see "Clean Clothes report," below). "I don't believe these buildings had the right filters because I could always smell chemicals on him," she says.

But a number of factors got her thinking that asbestos may have been to blame for her Enrique's death, such as frequent questions regarding asbestos from his doctors. As well, non-Hodgkin's lymphoma has been linked to asbestos. According to researchers at the Department of Pathology and Microbiology University of Nebraska Medical Center, asbestos exposure has been linked to non-Hodgkin's lymphoma (NHL) in several case reports and epidemiologic studies.

Lorraine's husband told her that asbestos was stored at the back of the plant. And when her brother-in-law was constructing a building, the builder he worked with confirmed that asbestos was in the Levi Strauss plant. "My brother-in-law told us how far down into the ground the demolition crew had to go when the building was demolished (about 10 years ago) because the asbestos was everywhere, not only in the structure," says Lorraine.

The plant where Enrique worked for 23 years was in El Paso on Airways Street. "Throughout the years, many—and I mean too many—of his co-workers have died from lymphoma," says Lorraine. "Enrique had two aunts who worked in the plant; one worked her entire life there and she also died of lymphoma. And his other aunt has recently been diagnosed with lymphoma…"

Enrique was diagnosed with stage 4 non-Hodgkin's lymphoma in October 2005, and he passed away on October 21 of this year.

"About four or five years ago there was a class-action lawsuit against Levi Strauss, which had something to do with people getting lymphoma," says Lorraine. "One of the girls who worked in HR—she was at Enrique's memorial service—knows quite a bit about what went on and I'm going to track her down. I recall her telling my husband that the employees lost the lawsuit because they had poor representation. Hands down they should have won that class-action suit. She also said that if the workers had a larger firm to represent them, there was no reason why they shouldn't have won their suit."

Lorraine fights back the tears as she talks about Enrique. "I'm just numb," she says. "I just wish he would come back, I miss him so much."

More ASBESTOS MESOTHELIOMA News
Levi Strauss has been the target of many lawsuits worldwide over the years, from sweatshop allegations to overtime issues. An example of work practices and violations of Levi Strauss's Code of Conduct from a Clean Clothes report (1998) said that "In November 1995, a visit to a Dhaka factory…in Bangladesh revealed a hot and crowded workplace where workers were covered with white dust." Keep reading and you will discover the amounts of chemicals used by the jean maker—under "Toxic Fashions."

A more recent indication of asbestos exposure at Levi Strauss comes from the Madison County Record (March 31, 2010): "Ardyce Riggs of Arkansas, a worker at Levi Strauss Company from 1970 until 1979, claims pleural mesothelioma. Riggs claims she was also secondarily exposed to asbestos fibers through her husband, David Riggs, according to the complaint. Ardyce Riggs will be represented by James F. Kelly and Jeffrey A.J. Millar of Brent Coon and Associates in St. Louis. Madison County Circuit Court case number: 10-L-241."

Hopefully, Riggs will have better representation than those people who lost their class-action lawsuit years ago. Lorraine will definitely find an experienced asbestos attorney with her claim against Levi Strauss.

Posted by
Paul W. Ayers
on November 28, 2011
I have extensive experience in the Asbestos Removal /HAZ/MAT industry, i have found a troubling "pattern"developing across the United States...Unprotected Asbestos Demolitions, by Untrained Cheap Labor and Poor Enforcement on City/County/State and even sometimes Federal, as I have again been Told By WA L&I that "Demoltioned Friable Asbestos" Hiding Behind Ceilings and Walls in a Public Facility is "No Hazard and Safe"??? and this is their Asbestos Compliance Officer???

Another troubling matter to note to and make note of: Dr's do not like it when paitents tell them about "Friable Asbestos" and trying to get asbestos issues properly documented into paitent's permanent medical files, as again the above "Tragedy" could have been prevented, when will Amercia step up with Austrailia and Great Britian on Asbestos..however I do not wish a ban on asbestos....

Just on how it is used and illegal asbestos demolitions are on a HUGE rise here in Washington State which has Huge "DOUBLE STANDARDS" of one does their investigations and research as Jane Mundy has done....obviously she has done much investigations and so have I in my case here in Lake Chelan...and my time i have Left??? I can Only Pray and Have Each Day as a Blessing..so we must Pray for those Who have Lost Loved Ones due to Asbestos Related Diseases and those Who are Exposed...and the above makes me never ever wanting to purchase another pair of Levi..yet whos.whos in the Corprate Stakeholders...why is Not the Worker Offered a Stake??

Again My Feelings Personally about Friable Asbestos Exposure...I have had Long Term Friable Asbestos Exposure from Two Local sources my home i rent...tested out 75% Pure ACM and then the Asbestos tape in my heater ducts..tested 70% Pure..Friable Damaged Asbestos..then the real bad Scene..a Public resort a Popular Destination and the asbestos I gathered while my employ there in a "Fire Remodel" this Friable Asbestos tested 80% Pure ACM Content..and this is located in those walls and ceilings and again I question WA L&I Asbestos Compliance Inspectors Competency and Honesty with Integrity...who do you Trust....the man who Blows the " Whistle" or the Person trying to Hide FriableFactsForever From Public View.but again I will Pray for the Families as Friable Asbestos Exposure at High Levels Long Term...The Closer the person to the "Source" has Higher Than a person a kilometer away...

Fact...did You Know 15% of Amercia's Workforce dies every year due to asbestos related diseases...thats easy math to do, why does AMA's numbers not Match? ask yourself..who looses..
Fact...Asbestos Is Known and Proven...to cause just more than mesothelioma's,but research has shown it can even divide chromosomes...who looses...
Fact ...persons sit in Federal Prison Right Now for Exposing persons in illegal asbestos reporting and not using proper legal asbestos protocols..
Fact...I am a Exposure Victim..thats Fights While I can for YOU and Your Loved Ones Every Person On This GLOBE...I'll keep Fighting too....You are Worth it families are Worth it...Life is Worth it..even though my sentence... for being a Honest Loving Man...I am Forgiven..Smile and Know...and
Fact...Stand with me Fight illegal asbestos demolitions and a ZERO Tolerance in regards.fight for .possible life sentences to those who leave us to Asbestos,this will "effectively"STOP all illegal asbestos practices and falsification of records.
Be Safe and Educate,Study,Teach Prevention,Teach Love

Posted by
Joyce Wooten
on November 27, 2011
I've just been so worried since all of these cases have come to light because.. as a child growing up in Detroit city,I had to walk two miles to school every day through the pollution and it was horrible back then.I could see thick black smoke pouring out of pipes all across the sky,and all the houses were old.The pipes in the basement were covered with a thick black substance that i was told was asbestos.I'm sure that I was continually exposed,so don't know if that's a death sentence,or lifelong illness ahead.