It takes William a lot of effort to speak more than a few sentences at a time. And it took him a long time to figure out that his respiratory problems were likely caused by asbestos exposure when he worked in the construction industry. “I’m having a hard time talking to you right now, but I want to get through this—I want construction workers especially to be aware of asbestos exposure,” William says, coughing. “Don’t wait until you are as sick as me to file an asbestos lawsuit.” 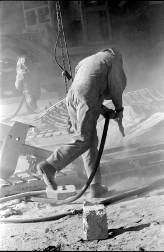 William didn’t “connect the dots” –or asbestos fibers-- until he was recently diagnosed with asbestosis. “First I was diagnosed with chronic obstructive pulmonary disease (COPD) in 2005 but I don’t smoke and the doctors at the VA hospital never explained how else I could have developed this disease,” he says.

(According to asbestos.com, COPD is not directly caused by asbestos, but researchers suspect that exposure can increase a person’s risk for developing an asbestos-related disease, such as asbestosis and mesothelioma.)

“I worked at a sandblasting company in the early 1970s where we blasted paint and rust off large butane tanks,” says William. “Asbestos was coated on the tanks and the air would be completely clouded over with asbestos fibers and who knows what other chemicals. We didn’t have any safety gear, nobody ever mentioned it.”

William explains that, although he didn’t know it at the time, he did some research after his asbestosis diagnosis and found out that the heaters and pipes he helped demolish from commercial and residential buildings were insulated with asbestos. “Again, no safety gear— we weren’t even given as much as a paper mask,” he adds.

Asbestos was widely used in the construction industry up until the 1970s. One recent asbestos lawsuit was filed on behalf of six Tennessee workers who alleged that they were exposed to asbestos after contractors refused to supply them with safety equipment. At the time, and like William, the workers were unaware that the materials they were ordered to demolish contained asbestos—and they were told as much by the contractors. However, government manuals later revealed that indeed, the materials did contain asbestos.

More ASBESTOS MESOTHELIOMA News
The contractors who hired the workers—according to the lawsuit—ordered them to cut up the materials with saws that created large amounts of dust and debris. They were also ordered to burn insulation materials containing asbestos. The workers say they were also denied any respiratory equipment when they burned the materials.

Acting on his asbestos attorney’s advice, William has compiled a list of companies he worked for, contractors and any brand names of products potentially containing asbestos that he can remember. But it is an effort just to do that: He is now living with supplemental oxygen and is completely house-bound—at 65 years old. “Sometimes I can’t take a deep breath and it feels like I am suffocating,” he says.

Construction workers, along with shipyard workers, auto mechanic and military veterans are at the greatest risk of asbestos exposure. These occupations are known to have the most prevalent asbestos use.

Posted by
james robinson
on January 14, 2015
I just found out i have copd from smoking cigarettes, i stopped smoking in 94. will i have a case against the tobacco company?
Posted by
Michael J Parks
on October 11, 2013
Is it too late to file a claim? I have COPD and have been around asbestos since early 1970's. I am currently suffering and disabled.

Click to learn more about LawyersandSettlements.com
LawyersandSettlements.com - A trusted, independent legal news provider bringing quality news and information on all legal cases and lawsuits filed in United States of America to its readers since 2002. Over 250,000 legal help requests including Environment Cases, Defective Product Cases, and Personal Injury Cases have been forwarded to lawyers all across to the country.