Elliot R. moved to New York when he landed a job at the World Trade Center. Ten days later it came down and Elliot volunteered on the cleanup crew. "The air quality was overwhelming, the amount of particulate matter in the air was palpable," he says, "and a lot of asbestos was in the air."

Elliot has asthma but it was under control when he moved to New York; he didn't have any respiratory problems before 9/11. He stayed in New York for as long as his health allowed, working with the Twin Towers Job Bank and putting together a database of jobs for those affected by that day. But Elliot's respiratory problems were so bad that he ended up in hospital on two separate occasions. 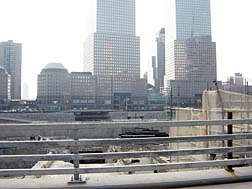 "I know that there are plenty of lawsuits now surrounding the cleanup—many people have already succumbed to respiratory illnesses from airborne particles, such as asbestos," says Elliot. "Finally, I had to leave New York because of my respiratory illness. It got to the point where I couldn't breathe—my lungs just shut down and I was in ER for hours on end on oxygen.

Now I have a host of physicians who are keeping tabs on my condition here in California and I'm on a wide range of drugs to see what will be most beneficial. I haven't been diagnosed with lung cancer but I'm concerned because there is absolute proof that asbestos fibers were in the air that day and for many days afterward. I've been speaking to many groups and agencies—I'm not alone on this issue.

As well, I worked for an insurance company and know first-hand that there are many lawsuits against the city associated with the clean-up and asbestos but nobody wants to pay the costs associated with 9/11.

When those towers were built, there is no doubt that asbestos was used as a primary material in the construction. My father is an engineer and he built skyscrapers, projects that were huge. He told me that indeed, asbestos was widely used."

Initially, The Environmental Protection Agency (EPA) told the public that the air after September 11, 2001 was safe to breathe. Consequently, many people cleaning up after the twin towers did not use respirators and other professional cleaning equipment.

More News
The EPA did find asbestos, a potent carcinogen, in dust samples. In fact 25 percent of dust samples contained asbestos. Years later, many New Yorkers are still suffering respiratory problems from exposure to asbestos dust. Physicians have voiced concern that the event could trigger asbestosis, cancer and other long-term diseases in the future.

Many rescue workers who were "on the pile" had only paper masks during those first few days. Many of them are now suffering from lung diseases. Back in 2003, Dr. Robin Herbert, a physician and researcher at Mt. Sinai Hospital who worked on a program that screened and treated rescue workers and volunteers at the site, said that "a substantial percent continue to have persistent upper and lower respiratory symptomatology — coughs and sinus problems."

But lung cancer associated with asbestos, in particular mesothelioma, is known as the
"silent killer". Sometimes it takes decades to scar lungs and cause cancer. For many people like Elliot, the long-term consequences of the air pollution in those days and weeks have yet to be seen.