It's unfathomable that just two years ago, a crew of 15 men were hired to tear down a property that was riddled with asbestos without being issued respirators or any kind of safety gear. In fact, they weren't even told that the buildings contained asbestos. According to Justin S., one of the demo crew, the building company knew.

"The building company, CSBI, hired me in April 2006 to work at Highline Terrace apartments, ripping out floors and drywall and demolishing many units," says Justin. "About five months into the job, Denver city and Colorado state health officials found asbestos in the building. The state told management to evacuate all residents within 24 hours; they didn't even let them take their clothes or furniture because it was all contaminated. 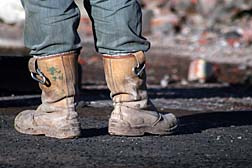 "They closed down the entire apartment complex and when it was tested, most of the materials we ripped out had 25 percent asbestos ratings—which is really high. There was even asbestos found in the soil.

We were never issued safety gear or masks, nothing at all. Our 15-man crew was exposed to asbestos daily. We were eating it for breakfast every single day without knowing it. Some of the crew had been working there months before I even started. We had no idea.

Once it was closed down, the company that hired me--Commercial Services Building Incorporated (CSBI )-- sent us to asbestos classes. I guess they did this gesture to reduce their fines. (I know that CSBI ended up paying some pretty hefty fines and as far as I know, they have an ongoing lawsuit against the state of Colorado.)

The day they shut us down, I was really surprised. We knew asbestos was dangerous but didn't know what it was until we went to the classes. I didn't know where it could be found. An abatement company tested each property and unit for months. They gave us copies of the reports and that is how we knew how much of it was on the site and where it was--it was in everything.

Just thinking about how we were punching holes in walls like nothing, ripping it out with our hands, gets me so pissed off. I am sure that some of our crew that will wind up with respiratory problems because of this. I'm a healthy guy and I'm only 25, but now I know that it can take many years for lung cancer to develop—there is a long latency period.

I am way pissed off. Once we got done with those classes, I knew a lot about asbestos. The only reason that CSBI didn't tell anyone was because it was a lot cheaper to act like asbestos wasn't there. They are a huge corporation and they didn't care in 2006. But they care now that they got caught. I quit working for them last November. We were never offered any compensation. Apparently the only ones who knew about asbestos were upper management and the property owners...


On top of everything, after they were busted, the state of Colorado ordered CSBI to give all of our crew a physical exam once a year for the rest of our lives. They haven't done that yet, not to one of us. They are two years behind and as far as I know, they have no intention of doing so. You'd think that is the least they would do to stay out of more trouble."

More News
On July 31, 2006, seven weeks after residents of Highland Terrace were evacuated from asbestos-contaminated buildings, the Denver Post reported that the residents received refunds of their June rent and their security deposits from Omni Apartment Communities, the apartments' management company. Omni also gave the residents $100 Wal-Mart gift cards. How generous...

At that time, the Post reported that a spokesman with the Colorado Department of Public Health and Environment said state and Denver officials met with the apartments' owners but no cleanup plan had yet been submitted.

On August 1, 2007, the apartment complex re-opened, but 120 former renters concerned about their health are involved in a lawsuit against the property owners. Justin and his crew are also concerned.