Despite reams of research and countless deaths linking mesothelioma directly to asbestos, the Canadian government still says asbestos is safe "if handled correctly". Tell that to victims and their families of this horrific disease.

A Health Canada study on the cancer risks of asbestos has just been concluded but not yet released. Currently, two experts (Leslie Stayner, head of the School of Public Health at the University of Illinois, and Trevor Ogden, chair) who were involved in the study are urging the federal health minister to make the report public and have written letters condemning the delay. A total of seven scientific and medical experts from around the world were commissioned by the federal government to examine cancer risks. 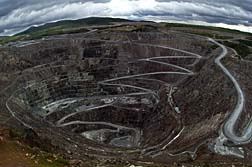 So what is the hold-up? According to Canada's heath minister, officials still have to review the study. The Canadian Broadcasting Corporation reported that Stayner wrote in his letter: "It is simply unacceptable for this report to continue to be withheld from the public, while individuals who have seen the report and our comments make erroneous allegations about what it contains to suit their political objectives."

Apparently, a ban on asbestos is the last thing Quebec's politicians want—asbestos mining is a big money-maker. However, not all provinces are created equal: it is likely the only province that doesn't want to ban the carcinogen.

About 700 people work in Canada's only two asbestos mines, both in Quebec—and it has one of the highest rates of mesothelioma in the world. A few months ago, Michel Arsenault, president of the Quebec Federation of Labour, convinced members of the Canadian Labour Congress not to call for a ban on asbestos mining until after the Health Canada study was completed and made public. And last week a Bloc Québécois Minister of Parliament argued against banning chrysotile, a form of asbestos.

Is that the reason for the delay? The two experts from the study say that they weren't asked their opinions regarding a ban on asbestos; rather, their job was to examine "the relative potency of exposure to chrysotile versus other forms of asbestos, and how best to estimate the risk of cancer from exposure."

Canadians and advocacy groups worldwide are putting more and more pressure on Canada to stop the mining and exporting of asbestos. It is now the leading cause of occupational disease and occupational mortality in Canada.

Asbestos has been banned by nearly every developed country, as well as a growing number of developing nations. Yet Canada still exports the material to third world countries such as India and Pakistan, and has spent about $20 million in the past two decades promoting exports of asbestos.

More News
Both Stayner and Ogden, however, said the panel was never asked its opinion on whether a ban on any form of asbestos was appropriate, and that it was only charged with examining the relative potency of exposure to chrysotile versus other forms of asbestos, and how best to estimate the risk of cancer from exposure.
"I want to make the record clear that nothing in the report would argue against the sensibility of an asbestos ban in Canada or for that matter anywhere else in the world," Stayner told CBC.

The Canadian government believes asbestos is safe if handled properly and has spent nearly $20 million in the past two decades to promote exports of the mineral, almost all of it going to developing nations such as India, Indonesia and Pakistan for use in construction material.