Jurors in Baltimore have found defendants liable in two separate cases, in which exposure to asbestos-containing products caused the plaintiffs to develop mesothelioma.

On January 30, 3008, a Maryland state court jury ordered John Crane Inc. to pay
73-year-old George J. Linkus, $15.3 million in damages after he contracted malignant mesothelioma working with the defendant's asbestos-containing rope.
Linkus worked in a machine shop lining valves using the rope on a daily basis. According to his attorney David L. Palmer, Linkus worked at Key Highway Shipyard from 1952 to 1959.

On February 1, 2008, a jury in Baltimore Circuit Court found Scapa Dryers, Inc., and Wallace & Gale liable in the asbestos-related mesothelioma and lung cancer of former paper worker Carl Saville. Saville was a paper machine operator, during the 1960's and 1970's, at the Westvaco paper plant in Luke, Maryland. He worked on drying machines which utilized Scapa-manufactured dryer felts containing chrysotile asbestos. 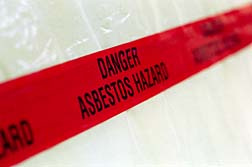 The plaintiffs argued that Saville was exposed to asbestos-containing dryer felts produced by Scapa as well as pipe, cement and block insulation installed by Wallace & Gale, resulting in the development of the harmful disease.

Saville had waited for this retrial since 2003, when the original verdict, in his favor, was overturned on appeal. In 2002, a lobectomy revealed Saville had a mesothelioma tumor, and he was diagnosed with lung cancer.

Mesothelioma is a type of cancer that begins in the tissue that line different organs and spaces inside the body. This tissue, called mesothelium, protects organs by making a special fluid that allows the organs to move. This fluid also makes it easier for the lungs to move inside the chest during breathing.

Asbestos, is a naturally occurring mineral. It is a fibrous hydrated silicate which possesses the unique characteristics of high tensile strength and flexibility. It is also chemical, electrical, and thermal resistant.

These properties along with the relatively low cost of asbestos have resulted in its widespread commercial use. In the past, asbestos was used in insulation as well as in other products such as floor tiles, door gaskets, roofing, patching compounds, and more. Most use stopped after 1989, but it is still used in some products. Since asbestos is a natural mineral, it can also be found in dust and rocks in certain parts of the United States.

The risk of getting mesothelioma depends on how much asbestos a person was exposed to and for how long. Mesotheliomas take a long time to develop. The time between the first exposure and finding the disease is often between 20 and 50 years.

People who may be at risk for asbestos exposure include miners, factory workers, makers of insulation, railroad workers, ship builders, gas mask makers, and construction workers. Family members of workers exposed to asbestos also have an increased risk of mesothelioma as asbestos fibers are carried home on the clothes of the workers.
There are an estimated 2,000 to 3,000 new cases of mesothelioma each year in the United States. The incidence of mesotheliomas in the United States increased from 1970 to 1990 and then stabilized.
In European countries, the rate of mesotheliomas is still increasing. In 2004 over 1,600 people died from mesothelioma in the UK, but the peak in numbers won't be reached until around 2015 when 2,500 new cases are expected. (Source: Health & Safety Executive. Mesothelioma mortality in Great Britain: estimating the future burden. National Statistics 2003).
Production and use of asbestos in Canada peaked in the mid-1970s, and began to decline sharply after 1980. While current use of asbestos is relatively low, mesothelioma incidence rates are still rising rapidly. The sharp increase in mesothelioma rates over the past two decades has led to tens of millions of dollars in BC workers' compensation claims at a cost of roughly $154,000 to $200,000 per claim. New cases of mesothelioma—which has a 30- to 40-year latency period—are expected to echo this increase, with a peak in cases likely between 2000 and 2010. (Source: UBC Centre For Health Services And Policy Research; Mesothelioma patterns and trends, 1970 to 2002: A pilot study).

The incidence of mesothelioma increases with age, and is rare in people under age 55. Three-fourths of people with mesothelioma are over 65 years old, and the disease affects men 5 times more often than women.

Mesothelioma is a serious disease. By the time the symptoms appear and cancer is diagnosed, the disease is often advanced. The average survival time is about 1 year. The 5-year relative survival rate is around 10%, but this rate has been slowly improving.

More News
Treatment options for mesothelioma include surgery to remove the part of the lining with cancer and some of the tissue around it, chemotherapy, radiation therapy, anticancer drugs placed directly into the lining after the tumor is removed, and drug trials using a combination of these options.

If you contracted mesothelioma, chances are that you were exposed to asbestos fibers at your job (occupational exposure), and you might have legal options as a mesothelioma victim. The best thing to do is to immediately contact a mesothelioma attorney.

An attorney can help you determine if you qualify for compensation to pay for your medical care. Additionally, an attorney will tell you what records you are required to provide to the defendants attorney, the state agencies involved, and court.

More importantly, your attorney will make sure that you obtain the rightful compensation.

If you or a loved one has suffered repercussions in the role of whistleblower, please contact a lawyer involved in a possible [Asbestos Lawsuit] to review your case at no cost or obligation.
Request Legal Help Now