Frank M. worked with asbestos for most of his life, from the Navy in the 1950s to a paint manufacturer in the 1990s. That's 40 years of asbestos exposure, without being given proper safety gear or respirators, without knowing that his work environment could lead to asbestosis or even worse, mesothelioma. "We didn't know anything about the danger of asbestos - all we knew was that it was a good insulating material," says Frank.

"I was an electrician on navy ships in the '50s, mainly working in the boiler-room with asbestos insulation," says Frank. "We worked around piping where the wires were located and the pipes were covered in asbestos; we bumped them and knocked white dust into the air. I was aboard ship for almost four years and did this work day in, day out. 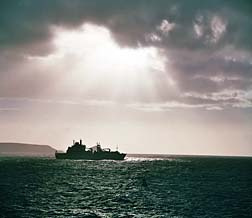 When I got out of the service I worked for Hercules Inc., a manufacturer of pigment—base colors used in paints. I was a carpenter millwright and our job was to maintain machinery. Part of the work we did involved cutting asbestos blocks; we wore minimal safety gear--the flimsy respirators didn't help much—we just took them off and we would be covered in white asbestos dust. The quality of respirators back then wasn't like today.

But I have to say that the company did what they thought was right at the time-- by even providing them. The exhaust fans didn't take the dust out—the rooms would be thick like a white cloud. After that, I became shop foreman and part of my job was supervising pipe fitters. And they worked with asbestos! It was a bad period -- an awful lot of people worked with this material, it was insidious back in those days.

Eventually the plant closed and I retired. A doctor was first to notice my respiratory problems in the early 1990s; I was getting some pre-op testing done for minor sinus surgery. When x-rays were taken of my lungs, some spots were found so I was sent for a CAT-Scan. One week later the results came back: asbestos spots on my lungs.

To tell the truth, I didn't think too much of it at the time. Even with that diagnosis, I didn't realize how serious this was. I am 69 and in pretty good shape, no major illnesses; but I got out of breath easily...

I've had a few more CAT-Scans since then and the spots are starting to change. There is now a thickening in the bottom of my lungs. I didn't really dwell too much on my health and general well-being until now. I am scheduled to go next week for a complete pulmonary work-up and another CAT-Scan.

More News
I am curious to find out what they are going to tell me. I'm not the worrying type, more the laid-back kinda guy. I could get all excited but what good would that do, besides create a whole lot of stress. I also have a good support system—there are three nurses in my wife's family.

When I found out about the asbestos spots, I immediately went online—I've now learned a lot about asbestosis and wish I had paid attention years ago. I think it is appalling that asbestos is still prevalent in so many industries. And I'm sure that many people are still working around asbestos like I did, they don't realize the repercussions. I wish I knew this sooner because my father had the same problem.

Although he died from congestive heart failure, my dad worked as a pipefitter--around asbestos most of his life. I'm not aware that he had lung cancer but that also doesn't mean that he didn't have it. I also discovered that mesothelioma can live with you and stay dormant for so many years."