Although paper mill workers are typically not at high risk for asbestos exposure, a Seattle jury awarded $10.2 million last week to Mr. and Mrs. Barbin in a lawsuit filed against two former manufacturers of asbestos-laden dryer fabrics used on paper machines. 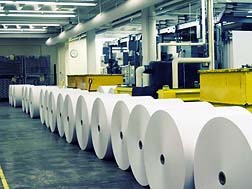 Henry Barbin worked as a pulp tester, paper tester, and more at Scapa Dryer Fabrics, Inc. and AstenJohnson, Inc. between 1964 and 2001. Exposed to asbestos fibers from dryer fabrics for almost 40 years, he was diagnosed with mesothelioma cancer in 2006.

Henry and Geraldine Barbin's asbestos lawsuit claimed that the asbestos dryer fabrics were defectively designed and failed to carry warnings about the dangers of asbestos exposure. Henry Barabin was awarded $700,000 for medical expenses, lost income and household services and $8 million in non-economic damages for pain and suffering. Geraldine Barbin was awarded another $1.5 million for her loss of consortium claim.

On November 20, 2009, Betty Lou Cunningham filed a lawsuit against Chevron USA, claiming the oil company is responsible for the death of her husband, Billy Cunningham.

The suit alleges that Chevron failed to protect its workers from potentially deadly asbestos dust and fibers. It also claims that Chevron knew the hazards associated with asbestos-containing products but chose not to remove employees from the toxic environment.

While employed at Gulf Oil, Mr. Cunningham was exposed to toxic materials including asbestos dust and/or fibers, which caused him to develop mesothelioma lung cancer—an asbestos-related disease—from which he died in February 2009.

According to Asbestos.com, Ms. Cunningham seeks "to recover from the defendant an amount in excess of the jurisdictional limits of the courts."

More ASBESTOS MESOTHELIOMA News
On December 7, 2009, a Texas couple filed a lawsuit against 100 companies. Charles Dees and his wife, Mary Guidroz, allege that the companies' negligence and lack of safety measures exposed Mr. Dees to occupational asbestos for nearly 30 years, resulting in his diagnosis of lung cancer in 2007. Mr. Dees and Ms. Guidroz have included as defendants in the suit gasoline companies BP, Chevron, and A.W. Chesterton.

The suit claims that the defendants' facilities were unsafe and contained asbestos-containing insulation, which was sold and manufactured by product defendants.

Meanwhile, 760 Libby vermiculite miners and residents are still waiting for justice after civil claims against Maryland-based W.R. Grace & Co., the global supplier of catalysts and other products, were halted in 2001 when Grace filed for bankruptcy. W.R. Grace's liability, in this case, was estimated to range from $385 million to over $6 billion. The company proposed to pay into a trust fund from which past, present and future victims can request fair compensation until 2034, providing the judge and a majority of claimants are in agreement.