Asbestos Mesothelioma – The Legal Down and Dirty 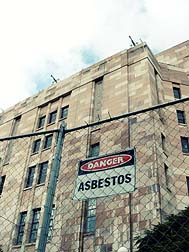 California-based attorney Patrick DeBlase represents people who have been diagnosed with mesothelioma."There are between 2500 and 3000 new cases of asbestos mesothelioma per year in the US," DeBlase says. "People typically die within 6-18 months of diagnosis. There are people who live longer, but in general, that's the reality.

"Companies have known about the health issues associated with asbestos since the 1920s and even earlier. Epidemiologists knew conclusively by 1955 that asbestos causes cancer. Then in 1960, a comprehensive paper was published by a man named Wagner from South Africa who showed that asbestos causes very a rare disease called mesothelioma – a cancer of the lining of the lung."

How Much Asbestos Exposure Is Considered Dangerous?

"Mesothelioma doesn't require extended exposure to asbestos," DeBlase says. "In fact, there is no established level below which asbestos exposure is considered safe. Suffice to say the more exposure you have to asbestos, the more you risk developing an asbestos-related disease. Everyone has their own individual risk level."

Asbestos exposure usually occurs at work or in the community, or as a result of what is called 'take home exposure,' when people come into contact with contaminated clothing or other objects belonging to family members or friends. "This is widely known and documented, and we see a lot of it," DeBlase says. "When you shake out clothing and see dust, you're looking at millions and millions of asbestos fibers. I have tried several cases where the wives have contracted asbestos mesothelioma and the husbands haven't."

More ASBESTOS MESOTHELIOMA News
Those who suffer the greatest exposure to asbestos tend to work in heavy industry or infrastructure-related areas. Brake mechanics are at high risk, as are people who spray applications of fire-retardant materials and textured plaster for ceilings and stucco. Construction workers also frequently use pipe insulation and joint compounds that fill cracks in plywood sheeting. "There are literally hundreds, if not thousands, of products that contain asbestos," DeBlase explains. "You'll find a lot of cases of mesothelioma around refineries, construction, and naval shipyards. California has a lot of cases. I know that San Francisco and Los Angeles are two hubs, and Alameda is a third to a lesser extent."

The latency period for asbestos mesothelioma is usually between 20 and 60 years, so it can be difficult to pinpoint where or when a person was exposed, particularly if he or she has worked around asbestos over a period of years and for different companies.

"In many jurisdictions, the law says you don't have to show which fiber started the disease process," says Len Jacoby, a partner with the national law firm Jacoby & Meyers, and who also specializes in asbestos litigation. "What you have to show is that the exposure was a substantial contributing factor in increasing the risk for developing the disease."

Posted by
pamela gallagher
on November 15, 2015
my grandfather worked for pacific power and lights in wyoming he was an electrician for atleast 38 years. Now 2 aunts and my mother have died from 3rd party exposure HELP