BC Ferries in Denial over Asbestos Exposure

BC Ferries recently closed the cafeteria on one of its ferries due to an asbestos risk, but the news didn't come from the government-owned company that runs the ferry system. Instead, the public found out about the asbestos risk from an assessment report written by Grant Rogers, an occupational hygienist with North West Environmental Group. 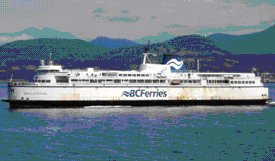 It would appear that the company is still sweeping the dust under the rug. By June 10, BC Ferries' website still gave no reason for the closing of the cafeteria, but according to the Victoria Times Colonist, BC Ferries spokesperson Deborah Marshalla said "a pile of white dust the size of a dime had been spotted on the ship." Later, a Vancouver radio station quoted her as saying, "The air test as well as the solid test has come back but a bit of debris we found has come back negative."

Not according to the asbestos risk assessment. "Results of confirmatory bulk sample testing... on a sample collected from the deckhead determined that the debris contains 60 [per cent] amosite asbestos," wrote Grant Rogers.

"The fact that the material tested positive for such a high concentration of amosite asbestos dictates that, as a precautionary measure, all debris should be considered asbestos containing... The loose debris will need to be removed from all surfaces including the top of deckhead tiles."

Clearly, BC Ferries does not want to shut down its ferry, but if a speck of white dust has "shown up," it could also be airborne. Rogers said that workers and adjacent personnel at high risk for exposure to airborne asbestos, as is the public who ate in the cafeteria.

More ASBESTOS MESOTHELIOMA News
The Queen of Burnaby was built in 1965, at a time when asbestos was in its heyday. Because of its fire-resistant properties, asbestos was used in insulation and building materials. Amosite fire proofing spray insulation is embedded within the bulkheads and deckheads on the ferry.

Asbestos is not considered dangerous unless there are loose fibers, and it would appear that it's time the Queen of B had a complete overhaul.

Although the company say it is taking steps to ensure that staff and the public do not have access to the cafeteria, and claims that "WorkSafe B.C.'s officers continue to work with B.C. Ferries on the matter," isn't it about time Marshall confirmed that the tests came back positive? The way BC Ferries is conducting business is reminiscent of the countless asbestos cover-ups by other companies.