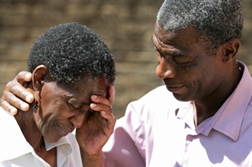 Rhoda's husband, Bobby Evans, worked for the Los Angeles County Department of Water and Power (DWP) for almost 25 years, cutting cement water pipes that contained asbestos fibers with a powerful abrasion saw. He was unaware that the pipes contained asbestos because CertainTeed Corp., the supplier of the pipes, neglected to warn their consumers of that very important piece of information. In fact, Certain Teed had known about the dangers of asbestos since the 1960s, but didn't mark their products with warnings until 1985, 25 years too late for Rhoda, who developed a life-threatening and incurable cancer directly caused by inhaling asbestos fibers.

At the trial, CertainTeed argued that the county knew the pipes should only be cut with manual tools to protect workers. Rhoda's attorneys, however, claimed that CertainTeed actually concealed the risk of asbestos exposure from DWP officials "in an effort to protect the $40 million in annual revenues the company made on selling asbestos-containing cement pipe to the county."

The LA Department of Water and Power was also held partially responsible for the compensatory portion of the award for its failure to adequately protect Bobby Evans on the job.

More ASBESTOS MESOTHELIOMA News
Some legal experts believe this, the largest mesothelioma lawsuit award in California history, is unlikely to stand under California law. "I couldn't say if it's the trial court or appellate court that will reverse," said Ted Frank, a fellow at the Manhattan Institute Center for Legal Policy, to Legal Newsline. Criticis call Los Angeles County courts the second-worst in the nation for legal fairness, partly because the juries there issue exorbitant damage awards.

Even if the punitive award is lessened, it will likely encourage other manufacturers to settle asbestos- and mesothelioma-related and cases rather than risk a jury trial.
Rhoda Evan's case is just one of more than 600,000 lawsuits that have been filed by people with asbestos disease and mesothelioma in US courts since 1929, when the first asbestos exposure suit was filed.
READ ABOUT ASBESTOS MESOTHELIOMA LAWSUITS