An asbestos lawsuit, filed by a former police officer who reportedly developed mesothelioma after exposure to the carcinogen could be settled for approximately $1.7 million. Like many others who alleged they suffered an asbestos injury, the police officer said he was exposed to asbestos in his line of work, which resulted in his asbestos mesothelioma. 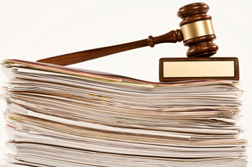 The police officer, William J. Rieman, was reportedly diagnosed with malignant mesothelioma in 2008, after he spent 14 years working as a police officer. According to WGRZ News (05/04/11), Rieman had compelling evidence that he was exposed to asbestos while working in city-owned buildings that were found to have contained asbestos.

Members of the Common Council voted to settle the lawsuit for $1.7 million, although Buffalo's financial control board will have to approve the settlement before it goes forward.

So far, asbestos is the only known cause of mesothelioma, which can take up to 50 years after exposure to the asbestos to develop. People who work in buildings surrounded by asbestos can develop mesothelioma, but asbestos fibers can get on their clothing, putting their family members at risk of developing mesothelioma as well.

Meanwhile, the family of a man who died of cancer was awarded $9 million in their lawsuit against two of the man's former employers. Dow Chemical will reportedly pay 30 percent of the award, while Alcoa Inc will pay the remainder of the $9 million. The family alleged that Robert Henderson was exposed to asbestos while working at Dow Chemical as a contracted employee. He later developed mesothelioma.

More ASBESTOS MESOTHELIOMA News
An article at Connect MidMichigan notes that Dow Chemical is seeking to have the verdict overturned, arguing the exposure to asbestos occurred elsewhere and they should therefore not be held responsible for Henderson's mesothelioma.

Even though some asbestos mesothelioma lawsuits are being settled, still more are being filed. Two lawsuits were filed in St. Clair County, according to The Madison St. Clair Record (04/14/11), alleging the plaintiffs were injured by exposure to asbestos. The lawsuits claim that the defendants should have known about the risks associated with asbestos exposure but did not use reasonable care and caution to protect the plaintiffs.

Both plaintiffs say they developed lung cancer that was caused by asbestos exposure, and their diseases disabled and disfigured them.

Posted by
Stella Lee Petric
on January 3, 2013
I contracted asbestosis at the U.S. Dept. of Commerce and have documents confirming friable asbestos fibers verifiable since 1993 through date that have been kept from employees.

This information has been documented by the Office of Special Counsel and reported by several employees, as in OSC File No. DI-10-0454. Also note that Jana Brooks and Fred Fanning are named in an asbestos employment discrimination lawsuit filed in U.S. District Court – Civil Action No. 11-0358 (ESH). (Lee vs. Locke).