"My daddy was a mechanic for more than 50 years right here in Clanton," says Reginia Minor. "He owned Brand's Garage and drove a truck for as long as I can remember. But in May, 2000 he developed what we thought was lung cancer; he was scheduled for chemotherapy but he didn't make it: the doctor confirmed that it was mesothelioma."

"At the time of his death I was mad as a hornet because his time was cut so short," says Minor. "But now I am glad that he went so fast; that he had to go. Have you ever seen anyone on chemo? That's why I am glad. Daddy would have never held up; he would have gone through all that pain and died anyway. 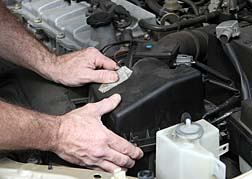 "He did brake shoe work and the asbestos fibers were in these shoes. I don't think a lot of people that asbestos is in brake shoes. When you pull the wheel off a vehicle and the drum is exposed, powders are all in the drum and they were blown out with air hoses. Mechanics back in those days didn't know any better; that is what you were supposed to do. They were breathing this stuff every day in garages that didn't have any ventilation, from diesel trucks on down to everyday cars.

My dad was very active up until a year before he got sick. Sure, he got drunk once or twice but he was a good person. ( Of course most dead people are good people, aren't they?). He had a good life though-- had five kids and worshipped the ground my mum walked on.

Being self-employed he could do whatever he wanted and he just kept working, right up until he retired at 72. My dad always said if he ever retired, he would die. And he did."

What follows is a bizarre turn of events: an account by Reginia Minor that is stranger than fiction...

Brand's Asbestos Settlement
"When my dad died, I had no idea that there could be a lawsuit against asbestos or anything. About two years ago, I saw on an ad on TV about mesothelioma law suits. I asked my sister Darlene about this because Darlene was my dad's guardian and she had power of attorney. That is when Darlene explained to me that daddy's case was past the statute of limitations.

However, unbeknownst to any of us, Darlene had filed a lawsuit when daddy died and was collecting on the settlement. The only reason I found out that she was collecting was because she committed suicide last September. Darlene was 44 years old; she shot herself in the heart. When I found out she had killed herself, it didn't come as a surprise.

Her husband came by and gave me all of her unopened mail after she died. He didn't have a clue what she was up to. That is how I found out: turns out that Darlene was receiving asbestos settlements since 2000 in my dad's name. Darlene was mentally ill and she was addicted to prescription drugs, mainly Oxycontin. I am so glad my mama has no clue of what's going on—she is in a nursing home with Alzheimer's disease. She doesn't even know that Darlene is gone.

More News
Apparently, Darlene got hold of some lawyers in Waco, Texas and told them about his asbestos exposure. I have five affidavits—asbestos claims—that were mailed to her. She was doing the homework, filling out all the forms. Even though she was a drug addict, Darlene was very intelligent.

I work at a hospital and I know all about drug addiction. I even put Darlene in a drug rehab program because she tried to commit suicide right after daddy died. Looking back, I can see where I messed up but that is in the past and I can't fix it. I read the signs but I ignored them. It's a sad situation. Her suicide note said 'I can't handle it anymore, I have gone to be with Daddy'. She asked me to take care of our mother and her daughter.