On Good Friday, Edgar Blouin was given his last rites at the Peter Lougheed hospital in Calgary. "Edgar started working with his dad when he was only 13," says his step-son Colin MacVicar. "He mixed bags of plaster and the air would be white with asbestos dust. Edgar just turned 64--way too young to die, especially because he was so healthy before he got lung cancer." Edgar's family suspects he has mesothelioma, but he will not be subjected to another biopsy. They will know soon enough. 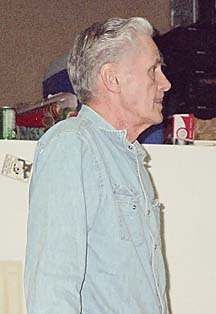 "Edgar's dad was a plasterer in Oshawa, Ontario," says MacVicar. "Back then, everyone knew that asbestos was part of the compound. Edgar's younger brother also worked with them and he passed away from mesothelioma 15 years ago. Back then they cut asbestos board for walls with a skillsaw, with the dust blowing in the air and no masks for protection. The rooftops in a small Ontario town were white with asbestos dust.

I wonder what happened to the people living there...

"It is hard to say how many people have got mesothelioma from drywalling because it is such a renegade trade. A lot of drywallers around these parts work for cash and have their own businesses. Other than the industry itself, Edgar didn't want to sue his employers where he had worked for the past 25 years.

Three years ago, Edgar developed pneumonia. He had an x-ray and a mass was found on his bronchial tubes, right at the bottom of his esophagus. It was the size of a toonie and it had progressed to stage 3 by the time they found it. He went to radiation treatments—I think that went on for five weeks. And he had the same number of chemo treatments. I took him to radiation treatments after work—he didn't want to take any time off. It made him tired but he felt ok; in fact he went into remission.

When Edgar went for radiation, the radiologist joked and called him 'asbestos boy'. Edgar knows why his life was stopped short.

He was happy to go back to work and even continue drywalling. Funny, that was the reason for this disease in the first place. We all know what caused it. But that trade was all that Edgar knew.

We had two more good years with him after his remission. Edgar's cough had been suppressed by so many drugs—he wouldn't even take an aspirin before this but now he was reduced to being a junkie. He started to lose weight and had a hard time eating, couldn't get it down. He went back to the cancer doctor and it had returned. At this point there was nothing they could do. We had a meeting about more chemo but they said it wasn't going to help. They said it was just a matter of time and he should get his affairs in order. He still went back to work and continued until December, 2007.

He went into the office last month and said 'I won't be coming back and would like to fill out a form for disability'. He is a very proud man and had never filed for unemployment in his life. He just filed for his pension.

I spoke to his insurance company and he should be receiving a check this week—if he holds on. He won't be around to enjoy it, no matter how much he gets. His only concern is that he is leaving my mum behind. My mum now spends her days by his side at the hospital.

I really thought he was going to pull through this but now I know cancer caused by asbestos is fatal. I have read so much about asbestos and lung cancer and they say cancer develops about 15 years later. That is exactly Edgar's time frame.

At this point I think Edgar will be satisfied to know that some good might be able to come from his story, if he can help someone else. We need to be aware of everything we are working with. I also work with drywall, taught and trained by Edgar. However, he pushed me to be a safety officer and to be aware of what we are working with, to read the MSDS (material safety data sheets); to understand what kind of protective wear you need to have.

In Edgar's days, this information wasn't available. But he was a big part of the new generation, making sure we are safe. Usually the old boys don't care. They tell us in safety school to get through to the new generation. Edgar isn't bitter about choosing drywall as a career--there isn't a mean bone in his body. It was his life and the thing he takes most pride in.

More News
On Friday his lung collapsed. He was resting comfortably at the hospital so we came home for dinner. The doctor phoned and said if we wanted to see him one more time, we had to get there right away. His other lung is doing the work for two and putting a strain on his heart. The doctor thinks his heart will stop beating some time this week--which is better than the alternative of not being able to breathe anymore. I pray it will come with no pain and he will just close his eyes and leave this world comfortably. He knows we all love him."

Jane, my family and Edgar would like to thank you for making other people aware of his story. We will continue to deal with this problem the only way we know how, by being a family and continuing to love our dad.
Sincerely, Collin MacVicar